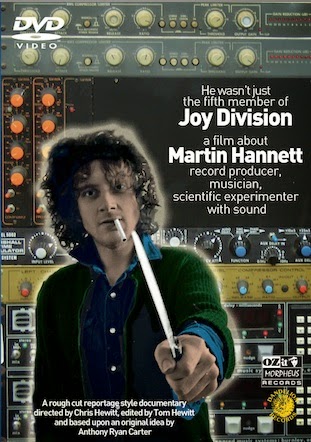 He wasn't just the fifth member of Joy Division

Anthony Howard Wilson once said, "If there's a choice between printing the truth or the legend, print the legend". Sage advice perhaps, given the word count devoted to the legacy of Factory Records and its accompanying baggage during the past decade or so, the Hacienda being one of them.

The truth and the legend states thus: because Wilson, Alan Erasmus, Peter Saville and New Order preferred to open a nightclub instead of investing in the latest Fairlight computer and updating equipment, spurned producer Martin Hannett, who might have benefitted from such investments, became embroiled in a bitter showdown with his former mates and subsequently went into meltdown.

Sadly his own legacy of engineering and producing some of the most remarkable music to come out of Manchester has previously come a poor second to his exploits in the studio. The sleeping under the mixing desk during sessions, the well-documented story of making a certain musician dismantle his drum-kit because of a rattling sound, the air-conditioning being 'cranked up really high', the drugs and yet more drugs. Pure chemistry, in more ways than five.

All of which provides ample ammo for a really good DVD documentary. And, right on cue, here's the not-so-snappily titled 'Martin Hannett, He Wasn't Just The Fifth Member Of Joy Division', a 'rough cut reportage documentary' (it says here) courtesy of Chris Hewitt, the man who has previously compiled various in-depth Hannett compilations. No recorded stone appears to have been left unturned, so to speak. On this budget-style film, old mates, both professional or otherwise, have been called up and asked to reveal a little more about the character.

The role-call of archive footage includes interviews with Tony Wilson, Vini Reilly, Bruce Mitchell (Duruttis), Peter Hook, Bernard Sumner, Tosh Ryan (Rabid), Steve Hopkins (Invisible Girls), Mark Radcliffe, Dave Formula, Reni and Andy Couzens (Stone Roses) and many other luminaries from the crazy world of Martin Hannett. Many commentators mention the man's quirks but also make many positive noises about his intelligence and likeable personality (most of the time). His penchant for expensive stereo equipment comes under scrutiny, as well as his desire to fill his beloved studio with the latest toys.

Despite (or perhaps because of) the ramshackle fly-on-the-wall nature of some of the DVD, the whole thing becomes rather engaging. This is no flash expensive BBC documentary, it's a gritty warts 'n' all tale of experimentation, laid bare with the minimum of trickery and a host of wide-eyed observers, interviewed from the '90s onwards - it's rather like witnessing a chat down the pub in some cases (this is no bad thing). There is a soundtrack of sorts, mainly confined to studio tape offcuts and a few videos of Hannett rubbing Wilson up the wrong way or, rather upsettingly, being wheeled around in a shopping trolley for a music video like an overfed turkey. Death was slowly coming by the time that infamous New FADS video hit the channels.

When all is said and done, Martin Hannett really wasn't just the fifth member of Joy Division, or the fourth in The Names or the third in Durutti Column - he was a pioneer in the mould of Joe Meek and Phil Spector, a one-off, a maverick and the like of whom we're unlikely to see, or hear, again. So, until someone at the Beeb gets off their arse and makes a high-end film about the man called Zero, this no-frills DVD will suffice. For now.