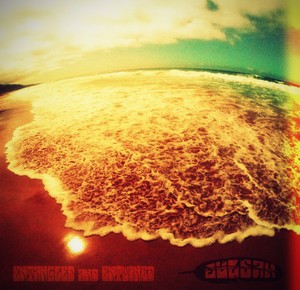 The psychedelic shoegaze of JULEAH, also known as Julia Hummer, becomes more mature with the release of the “Entangled And Entwined” EP. Laidback, relaxed songs and the sultry voice of Julia takes the listener to a calmer place.
A world with spacious views and a relaxing atmosphere. Opening song ‘The Verge’ is one of those songs that can’t be explained by words. Such a great song! Reminds a bit of a mixture between PJ Harvey and Fever Ray with a twist of JULEAH’s blues. Absolutely brilliant.
The self played layered 60’s/ 70’s guitar chords fit perfectly to her voice and the five songs on this record. Although most of the songs are almost in the same pace (only ’Neverending Swell’ has more tempo) it’s six songs (including the demo version of ‘The Verge’ at the end) enjoying the calm and tranquil world of “Entagled And Entwined”.
Tripping on ecstasy? Who needs it when you have JULEAH?