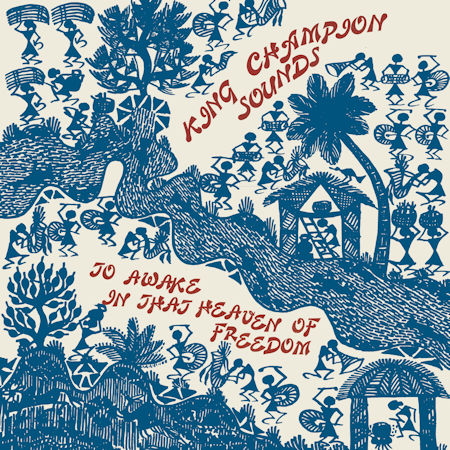 To Awake In That Heaven Of Freedom

Hailing from Holland and just two albums in, King Champion Sounds sound like a band that have been embarking on a mission since the mid-'70s. Formed primarily of multi-instrumentalist Ajay Saggar and post-punk ranter G.W. Sok (from The Ex, no less), KCS are a seething hybrid of psychedelic Krautrock in dub, pilled-out acid-funk and baggy legends Happy Mondays. Check What I Mean for Can meets Shaun Ryder and you'll see 'what I mean?'.

It's a brave band that plumps for a double sophomore album but they've nailed it with this enjoyable set and although this may nudge the 70-minute mark, To Awake.... is a consistent listen with a few surprises. Smallest Tribe in the World passes off as a tripped-out mantra with Minutemen's Mike Watt on vocals while another alt-rock luminary J Mascis lends a guitar-wielding hand on the opening Mice Rats Roaches.

Don't expect sprawling grunge-rock though - these are just names on a lengthy guestlist that also includes folkie Alasdair Roberts and various Dutch chums. What you can expect is horns aplenty, the occasional riff and some hefty rhythms that suggest King Champion Sounds can hold their own as a live band. You can also look forward to some out-and-out weirdness - Last Night We Saw A p.o.l.t.e.r.g.e.i.s.t sounds like Steve Reich, Negativland and Nurse With Wound having an orgy while Baarsiderius I has all the hallmarks of Ornette Coleman being thrown headlong into a room full of drum-kits while blowing his sax through a wind-tunnel.

To this end, when KCS aren't murdering instruments they're coaxing all manner of tangible energy out of them. Getting Tired recalls Factory oddbods Biting Tongues while If We Must Try continues the vaguely baggy ideas tried out on earlier tracks. Hell, these could almost be singles in a parallel universe.