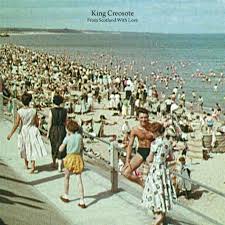 From Scotland With Love

Until his involvement with Jon Hopkins on 2011's lovely Diamond Mine album, Kenny Anderson aka King Creosote was a relative unknown outside of Scotland, a travesty for sure. On the strength of this soundtrack album created for a documentary film of the same name and released as part of the Commonwealth Games 2014 celebrations based in Glasgow, KC could well be drinking his favourite tipple from a crystal-cut champagne glass by the end of the year - awards rolling in, plaudits from critics by the truckload and healthy sales achieved.

Somehow though, one imagines that doesn't bother the man one jot. What matters is the superb music and in many songs on From Scotland With Love, he's got it in spades. Easily one of the tracks of the year provides the album's centrepiece - For One Night Only might not possess anything so churlish as a chorus but it does include a wistful intro and a fully-blown stone-wall belter of a build-up throughout. Biographical and intimate, Pauper's Dough is the album's socially-aware folk anthem, Largs is like one whooping great polka of joy while the strings-laced One Floor Down is another slice of pop genius. If you can seek out the expanded double-vinyl edition, do.