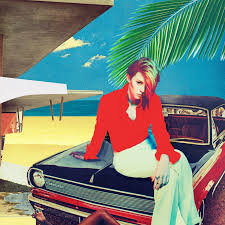 Girls just want to have fun - we know this because Cyndi Lauper proclaimed this some thirty years ago. On the opening track of one Elly Jackson's likeable second album, the same song has been appealingly rewritten as Uptight Downtown, in melody if not in subject-matter. Yes, La Roux hasn't changed a great deal in five years since her debut material hit the stores in 2009 - there are still assured nods to the '80s, still pin-sharp songs and still Elly Jackson - but the little that has changed is noticeable.

The upfront histrionics of smash-hit Bulletproof have been silenced, there is just Jackson (Ben Langmaid is no longer part of the line-up) and her voice has been calmed to afford the rich velveteen melodies on offer here. But that's progress in some quarters and Jackson may well have eschewed the services of Langmaid but this hasn't stopped her mixing up a pleasant long-player. Lyrically cheesy (I met him through a dancer/I didn't know he was a tropical chancer) but musically positive, Trouble in Paradise is a retro dream for those old enough to remember Thompson Twins, Paul Haig, Fashion, Heaven 17, Pat Benatar et al first time around and liberating to appease a new generation of La Roux aficionados. Those in the middle might have already left the building however, wallowing in the 'delights' of Lana Del Rey or First Aid Kit. That's pop-music, folks.