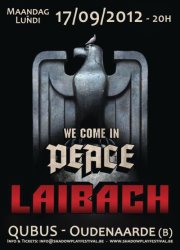 "One of the best shows of the year": that's what a lot of people said at the end of this concert. The venue (QUBUS in Oudenaarde) was perfect, the sound and the light-show were amazing, the setlist couldn't be better as it covered the band's entire career, the stage performance was simply staggering and the organization by Bernd Backelandt and his team, flawless.

Laibach's last concerts in Belgium date back from December 2007 at the Botanique in Brussels and December 2010 at the BIM Festival in Antwerp. This Slovenian avant-garde collective ("Laibach" is the German name for Slovenia's capital city, Ljubljana) has been active since the early 80s and can boast a incredibly rich discography. They are of course famous for their "Teutonic" covers of Opus, Queen and DAF, as well as for the dance-floor killer "Tanz Mit Laibach", but the real fans know that Laibach offers much more than this!

Only recently, they composed the soundtrack for the German-Australian comedy action movie "Iron Sky". It is precisely with this soundtrack that they introduced the show in Oudenaarde. The first song, "B Maschina", a cover of the Slovenian band Siddharta, immediately set the tone of the evening: a very powerful and epic sound, on which the unique, deep voice of Milan Fras growls like a circular saw. This first part of the concert, very bombastic, also included the cover of Europe's "Final Countdown" and the amazing rendering of the American anthem "America", a song full of subtle irony.

A first moment of rest came with the beautiful song "Iron Sky", on which we (re)discovered the splendid voice (and stage presence!) of Mina Špiler (also in the band Melodrom). As a whole, Mina is getting more and more place in the show and some songs have been rearranged to give her more opportunities to sing: a good thing!

Then came the "avant-garde" part of the concert, and for us, it was clearly the most interesting part. They interpreted completely revisited versions of 3 songs in Slovenian from the early 80s: "Smrt za smrt" ("Death for Death"), "Brat Moj" ("Brother Of Mine") and "Ti, Ki Izzivas" ("You, Who Challenges"). Here, the music is more experimental, sometimes dissonant but always hypnotizing. In the 80s, the band members had gone as far as actually work in a real factory, in Trbovlje's cement factory, in order to fully understand industrial atmospheres and imagery. On "Ti, Ki Izzivas", Mina Špiler, with her charming ice-cold look, screams the title of the song in a megaphone, and it's one of the highlights of the show. Check below the video of this unique moment...

The next two songs, "Die Liebe" and "Leben-Tod", from '85 and '87, clearly show Laibach's influence on the industrial wave of the late 80s. Here the rhythms and vocals are pounding and aggressive; no wonder that Skinny Puppy, NIN and later Rammstein acknowledged the influence that Laibach had on the elaboration of their own sound.

The next part of the show was devoted one cover of Bob Dylan's "Ballad Of A Thin Man" and one of Blind Lemon Jefferson's "See That My Grave Is Kept Clean" (also covered by Dylan by the way). Here again, Laibach transformed the original songs thoroughly, adding their typical Wagnerian overtones.

Then came a second moment of rest, during which Mina Špiler was left practically alone on the stage to sing the beautiful cover of "Across The Universe" (The Beatles). After this, the band came back for the final assault. First, with their astounding cover of "Alle Gegen Alle" (DAF), followed by "Du Bist Unser", a very nice dance-oriented song from WAT (2003) composed together with DJ Umek. Next came "Warme Lederhaut", an amazing cover of "Warm Leatherette" from The Normal (Mute's first ever release). This cover opens Laibach's last album: "An Introduction To... Laibach", which has just been released. Another nice surprise was the preposterous cover of Serge Gainsbourg's "Love On The Beat", which the band debuted at the Tate Modern show in April 2012. Very funny to hear Milan's voice singing in French, as well as Mina's orgasmic cries at the end. Finally, the setlist was closed in a masterly fashion with the band's greatest hit: "Tanz Mit Laibach".

During the encore, they played two covers from their album "Opus Dei" ('87): "Leben heißt Leben" (Opus cover) and "Geburt einer Nation" (Queen cover). Unfortunately they did not come back for a 2nd encore, so we couldn't hear "God Is God" (Juno Reactor cover).

Once again, Laibach demonstrated the uniqueness of their approach, which goes much further than just music. Their performance is multimedia oriented, it's multimodal art, a total show with sound, lights, video and a huge presence of the artists on stage. But most of all, they bring a sarcastic and very acute look on political issues, with totalitarism and military iconography at the center of controversy. With all this they created a new aesthetic style, unique and incredibly strong. Thanks for this great show!