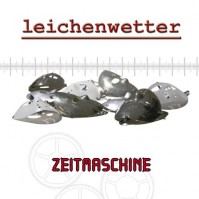 Outside the German borders Leichenwetter might be a quite unknown band but having said that, these guys are around since 1996.

“Zeitmaschine” can be seen as a sort of best album as this cd features all their best tracks from the “Unworte”-album which has been released in 2003 till now.

It has become more than just some cashing-in album as this band wanted to rearrange all the songs which are included on here.

The honest reviewer in me must admit that I am not familiar with the original versions at all, but it doesn’t stop me for telling you that this is a perfect album for those who like gothmetal that’s been sung in German.

Every band (or at least the good ones) should have heir own trademark and in Leichenwetter’s case this is not only the amazing voice from frontman Numen but also the fact that this band are taking their inspiration from poetry and German literature that’s been written in the past.

At times Leichenwetter sounds like Goethes Erben dressed in some metal suit and that is more than interesting, so perhaps not everyone’s cup of tea as they say but people who can’t get enough from Teutonic goth metal will like this nonetheless.

03
12 This month, 33 years ago Front Line Assembly released The Initial Command.
02
12 This month it’s 36 years ago Canadian industrial act Skinny Puppy released their very first EP Remission.
01
12 Russian Dark Community in search of new blood
01
12 50 years of Ruckzuck with Kraftwerk!
28
11 Today it's exactly 40 years since Siouxsie and the Banshees, released their Christmas single 'Israel'!
27
11 39 years of Don't You Want Me by The Human League

03
12 ALEX SKOLNICK (TESTAMENT, ALEX SKOLNICK TRIO)
'I was as knocked out as I was hearing Van Halen...'
14
11 PROYECTO MIRAGE
I Think We Needed A Break
21
10 DELERITAS
EBM-Indus Night Liège : The bands presented... Deleritas!
20
10 WULF7
EBM-Indus Night Liège : The bands presented... WÜLF7!
19
10 LISA GERRARD (DEAD CAN DANCE)
'I love the innocent dangers that can be experienced in musical performance...'