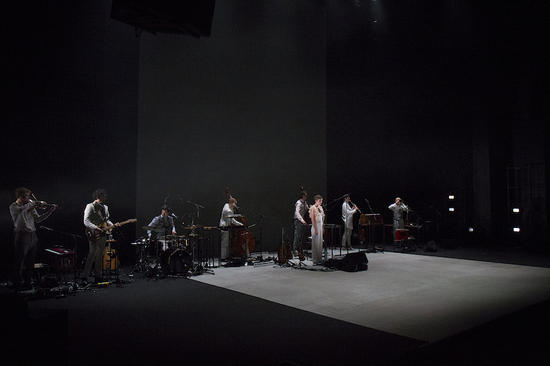 We were already very impressed by Liesa Van der Aa's solo debut Troops in 2012, but we must now aknowledge that the triple album WOTH (Weighting Of The Heart) is even stronger, a highly philosophical disc with a grandiose concept and very sophisticated music. And the live show, then? Well, it fulfilled all expectations: just fantastic.

As we enter the hall, Van der Aa is sitting on stage with her arms crossed, staring into the hall, as if she was an Egyptian god who would soon judge us. Or is it is she who will be judged by us? From the point of view of the Egyptian death ceremony of the weighing of the heart - on which this show is based - that seems more meaningful. In this ceremony the deceased appears before a panel of 42 judges and confesses her sins and shortcomings. Van der Aa assumes the role of the deceased, three times in a row.

The crowd falls silent once an actor is standing in front of them and stares thoroughly into the audience. Then the lights go out and a video starts in which Thoth - the Egyptian god of wisdom, who takes minutes and archives the sentences of the weighing of the heart - speaks to the audience. The film is reminiscent of David Lynch, with the strange shape of actor Johan Leysen and the many flashing images that stuck regularly. They symbolize the excess of stimuli and information that people face today.

Because in fact, WOTH handles especially that. We live in an era of tremendous freedom and an oversupply of possibilities. We must constantly choose between all the chances we get. We are told that we can achieve anything, if we fight hard enough. This abundance confuses us, and the ancient myth of the weighing of the heart is used to investigate this theme. The possible outcomes are worked out in three parts.

At the end of the video, the choir of 42 judges who will judge the weighing of the heart of the deceased, starts singing. It is visualized by actors who look down on the stage from behind a curtain. Part 1 is about a girl whose heart is too heavy. She is extremely self-centered, sees the people around her merely as the background to her own life, is excessively ambitious... She wants to excel in everything she does, and combine as many things as possible: a career, a good partner, success and recognition, having all satisfied her lusts and desires fulfilled...

She adresses Thot: 'I am freed from the desire to die.' This person wants to get the most out of life, but is constantly overwhelmed by doubts. Has she been successful enough? Could she not have done more? Liesa Van der Aa carries out this section completely by herself, only to reinforce the egocentric and megalomaniac character of the deceased. She does so through a system of violin and loops that we already knew from 'Troops'. She gratefully uses numerous effects on voice and instrument. The music is jarring and uncomfortable, with angular rhythms and menacing sounds piling up together and characterizing the hectic and stressful life of the main character. In the end Van der Aa pleads her innocence and she rattles off the names of 21 assessors of Ma'at - the judges, indeed - including 21 sins listed in the papyrus of Oth.

Part 2 starts immediately after part 1, as the songs follow each other seamlessly as well. Thoth adresses us from the screen again, and the choir raises its chants. Eight musicians appear on stage, the "carriers" of the main character. She speaks to Thoth with the announcement that she got rid of the will to live. Her heart is too light. This character has given up all hope to achieve anything. She is uncertain, submissive and unobtrusive. She conforms to the world or isolates herself completely. Our society wants all of us to be ambitious, and if you can't make it, then that is just your own fault. Because you can become anything you want, right? It is obviously a grotesque lie. People are made and broken by other people, symbolized here by the 42 judges who are just as well exponents of a society where everything always has to go faster and faster.

That just makes the main character withdraw from life. There are many references to suicide, though it is not clear whether she actually will commit it. Musically, this part is made of slow and mournful music. Liesa Van der Aa limits herself to the vocals and is 'carried' by the musicians, consisting of eight multi-instrumentalists who are playing violin, double bass, clarinet, flute, cornetto, organ, piano, synth, harmonium, guitar and drums. Only at the end, when she pleads her innocence again - rattling of the second part of the 42 sins of the papyrus of Oth - does Van der Aa take up the violin to produce threatening noises. The judges, however, have lost their patience and protest vehemently.

Thoth smiles as the third part begins. He talks about the third character, the heart of whom is in equilibrium with the feather: 'Is this paradise? Is this the place she has been looking for? She might be better off without paradise. Paradise may be better off without her.' The music sound much more poppy, but there is also rock, folk, country and avant-garde in the rich mix of styles. This is undoubtedly the merit of the cooperation with Katrin Lohmann, who had a great share in the making of the third part, both lyrically and musically. Again, the musical development is in line with the structure of the third part, where togetherness and cooperation with others is the cantral theme. Van der Aa contributes actively on autoharp and violin, and also gives her fellow musicians the space to sing solo voices and develop the songs.

The mix sounds like a liberation after two rather uncomfortable parts. We get lots of melodic songs with 'normal' rhythms. Eventually, the judges formulate a judgment again: they condemn and reward the main character by including her in their midst. The choir section at the end, however, evokes that things don't end that peacefully. On the one hand the choir sings 'we are united', but the more they stress that, the greater the solitude of Van der Aa becomes. Does the third character really differ much from the first two? Are the judges not too inconsequent and too quick in their judgments? That is what Van der Aa suggests. The judges are also the product of a crazed society where you need to be able to form an opinion about everything immediately. And so there is no clear moral to this story. Just a lot of questions to torment you.

The triple CD of Liesa Van der Aa was impressive, but the live implementation is even better. The realization of this gigantic concept with its artistic and philosophical depth, was certainly not easy. Van der Aa needed to cut in her work. Several compositions were shortened, and there were even some omitted, albeit with moderation. The use of videos, light show and costumes is well measured. So, there is still some humility and a lot of cooperation in this very ambitious show. I will borrow an expression that I only use with the greatest caution: a work of genius. 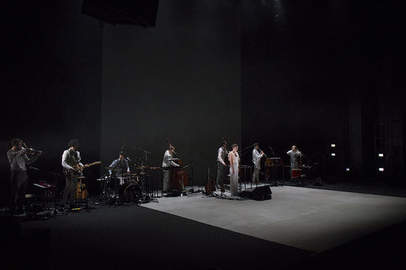