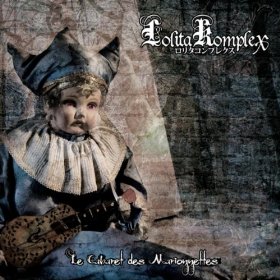 If Vladimir Nabokov had this type of music in mind when he described his obsession for young girls is another thing, but it gave this band some kind of inspiration, or did they just mean those sick Japanese manga characters?

With Zin-François Angelique on the microphone, this band has some Japanese blood as well. This woman was already around since 1980 with the Japanese death rock gothic band: Madame Edwarda.

The most known name that wanders through these bunch must be Eve Evangel who was till 2008 one of the key figures from Sanguis Et Cinis, a band who recorded eight albums and never could decide if they were goth or metal.

According to Eve Evangel himself, Lolita Komplex realises the dream he could never fullfill with Sanguis Et Cinis.

If we mentioned that his former band could never decide between Goth and metal then this counts for his new baby as well. You definitely hear some Goth related elements in their music but the guitars are definitely metal riffs!

From the very first song "My misery" you hear a sort of psychedelic Goth music that we heard in a band like The 69 Eyes but as soon as Madame Zin-François Angelique drops in, we can just come up with something that sounds like Theatre Of Tragedy.

We can drop as many names as we want but the clever reader has already understood that Lolita Komplex makes the kind of music which you love or hate.

Plus they're the type of band who aren't afraid to use some "woo hoo's" in their metal popsongs and we can imagine that some readers might think it's a bit over the top.

You know what? They might be indeed over the top but as life is nothing but some sick joke we can live with them.