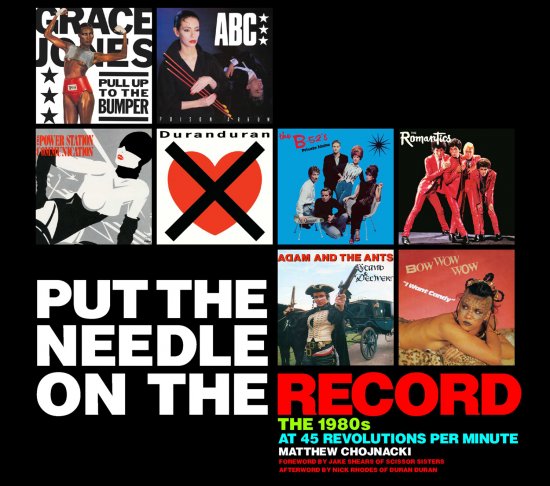 I feel a bit embarrassed in putting this new work by Matthew Chojnacki in the books category, as it is so much more... I better call it an artwork, as that seems to be the best way of describing what’s on offer here.

Chojnacki dives through his own record collection and takes us all back into the 1980s. Before we start the trip, it is best is to take a deep breath in preparation for what is to come. To this day there are still various people who don't recognise the importance of the decade and easily forget that it was so much more than a few videos on MTV. As you can already guess from the title, we are talking records here. There are other books dealing with album covers, but this time, we are talking 7" and 12" - 45rpm.

Quite a few glorify the art of the album but it shouldn't be forgotten that the same could be said about singles and maxi-singles. Luckily not only the covers are printed but explained as well, either with statements of the artists or the cover designers themselves. Really interesting is the way that the compendium is arranged; quite often fitting covers are shown on each of the sides and compared to similarities. Obviously iconic sleeves are included like New Order's 12” 'Blue Monday', done by the legendary Peter Saville.

You also get The Smiths, Depeche Mode, The Cure, U2 and Duran Duran - not necessarily with their biggest singles but rather unique sleeves (U2 is featured with a rare 7" from the Netherlands), covers are basically from all over the world with the logical main focus on US and UK ones. A fun thing is to browse through all the covers and see which of the records are in your own collection and besides that, you even learn about certain schools of design like the mail art movement that is shown via singles by INXS and Platinum Blonde.

Bands that always had rather controversial looking releases like The The are included as are ones, you would have never guessed to be put together like Limahl and Rod Stewart. And 80’s boys, don't worry, Samantha Fox is included as well, surely one of the most photographed women of the decade. I’d rather stay with Terri Nunn's Berlin and the cover of 'The Metro', though... If it comes to the closing words, what could have been a better choice than the one and only Nick Rhodes of Duran Duran ending this trip into the past?

'Put The Needle On the Record' is a magnificent and important release, that shouldn't be missed in any collection of an 80s music devotee. Hopefully one day Matthew Chojnacki will offer us a follow-up. Despite the 272 pages there are still many more stories to tell and covers to show...

If you live in Europe, the easiest way to order the heavy book via the European distributor Bushwood Books (+ 3.50 UKP postage if you are in the UK / 8.50 UKP Western Europe / 17.00 Eastern Europe).

Next reviews
THE HIRAM KEY • Amerikafka
DER BLUTHARSCH • The story about the digging of the hole and the hearing of the sounds from hell
KITTY IN A CASKET • Back To Thrill
NORTHERN SADNESS • Riddles Of Lunacy
SYNTECH • P'som-Sett
ADOLF FILTER/KORD/MONSTER APPARAT • Svensk Bonnasynth
THE CURE • Bestival Live 2011
DR.KRANCK • Haus 13
MADAME B • Psalm 37.29
H. ZOMBIE • Mutation