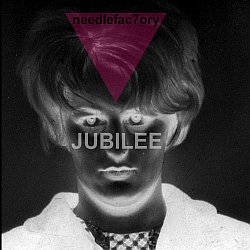 Another one on D-Trash, I have'nt the slightest idea who or what Needle Factory is, but they rock! Combining metal with breaky ebm/hellectro, it's like a rudimentary version of Ministry. Songs like Shut Up And Riot, All Advertisements Are Lies and Beautifuk have everything a harsh ebm-er wants, sloganesque shouts and hard 'n heavy beats.

A lot faster and mashed up is Wirtschafswunder, and heavy guitars are added on Jubilee, the core remain loads of electronics, none of that so-called modern stuff like dubstep though, HURRAY! Sometimes there's a hint of nu-metal (yuck) though, lyrically and vocally I mean. A fine snack and like all sweets, don't overdo it...