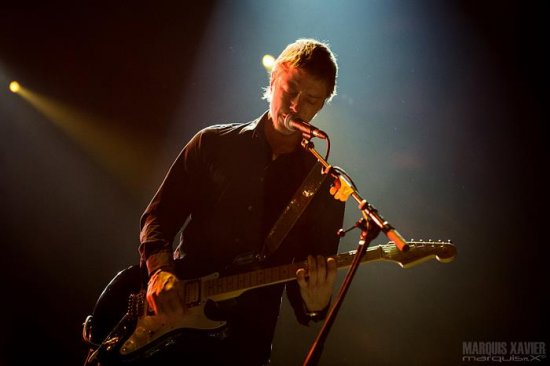 "Let the music speak for itself!", said Paul Banks in an interview to Metro. Well, that's precisely what he did at the Ancienne Belgique for his first show in Belgium as Paul Banks. No artifices, no big show: only 4 musicians and the music.

In 2009, after 7 years as frontman of postpunk mega-band Interpol, the New-Yorker had felt the urge to jump on the occasion of a hiatus in the band's career to start a solo project. He wanted to express the things he could not express within the band. First, it was via a pseudonym, "Julian Plenti" but in the autumn of last year, he dropped the mask and released an eponym album simply called "Banks".

We were eager to find out what his new avatar was like. After the supporting act, an interesting young band from Leuven called Willow, a cross-over between Bloc Party and White Lies, Paul Banks took the stage accompanied by his musicians.

As a whole his show can be divided in two parts: first, a majority of titles from his first solo album "Julian Plenti is... Skycraper" and then 7 tracks from "Banks" in a row. The major highlights were according to me, "Arise, Awake", "Over My Shoulder" and mostly "The Base", the promo single from "Banks".

Musically, the performance was perfect. Banks' vocals were flawless and he played wonderful licks and picking riffs on his new Fender Stratocaster guitar. Yes, he abandoned his famous black Les Paul Gibson for this customized Fender with two humbucker pickups and a middle position single coil. Between the tracks, he systematically thanked the audience in a timid and modest tone. Banks is known for being rather shy and during most of the tracks, he sang with his eyes closed. Damien Paris was brilliant on guitar, combining well structured rhythm parts with solo's. Brandon Curtis played a Gibson bass guitar probably enhanced with triggered bass synth sounds, while Charles Burst did a wonderful job on drums.

The last song of the set was the long "Summertime is Coming" and during the encore, the band played the soft "On the Esplanade" and the punchy "Games For Days".

As a whole, the music evoked of course Interpol but with less pop aspects. In solo, Banks likes to play with structures and song patterns, often surprising the listener with sudden changes of tone. A sort of 'prog' aspect, a bit destructuring. The public remained as a whole very quiet during the concert, but of course you can't tell whether it was out of boredom or simply because they were enjoying so much. People who had seen the previous concert as Julian Plenti said that it was better then, more intimate, especially thanks to the presence of a cello player. Here, it was a great concert for the fans and for musicians but some people probably thought: 'The music plays for itself but sometimes it is not enough'...

An excellent initiative from the AB: before the concert, there was a listening session devoted to "Unknown Pleasures", the first (and legendary) album of Joy Division. The session was introduced by Stijn Meuris, singer of the cover band Dead Souls, who gave interesting background information about the album and its recording with the famous Martin Hannett... Too bad Stijn didn't mention the Joy Division concert at the Plan K in Brussels in 1979, nor did he refer to the wonderful performance by Peter Hook And The Light at the BIM Fest in December 2012, where band of the former Joy Division and New Order bass player played the complete "Unknown Pleasures" album...

Thank you to the Ancienne Belgique for the accreditation and for the excellent organization.

Setlist:
Skyscaper
Fun That We Have
I'll Sue You
Only If You Run
Arise, Awake
Goodbye Toronto
Fly As You Might
No Chance Survival
Young Again
Lisbon
Over My Shoulder
No Mistakes
The Base
Paid For That
Summertime Is Coming
Encore:
On The Esplanade
Games For Days