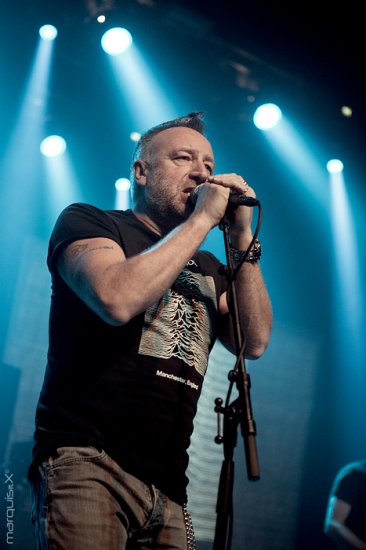 The headliner of the BIM Fest was Peter Hook, founding member & legendary bassist bassist of both even more legendary bands Joy Division and later New Order. Two years ago, Peter decided to honour the outstanding work of his first band and the undoubted genius of the late Ian Curtis by giving people the opportunity to hear Joy Division's "Unknown Pleasures", "Closer" and "Still" albums live on stage. At the BIM Fest, he chose to play "Unknown Pleasures", Joy Division's first album released on Factory records in June 1979. Before the show, he gave us an interview, which you can view below.

The band that accompanies Peter Hook in his tour is composed of Peter's own son, Jack, on bass, Nat Wason on guitar (ex-Haven, also in Freebass), Paul Kehoe, nicknamed Leadfoot on drums and Andy Poole on keyboards, both also in Monaco and Revenge, two side projects of Hook. As soon as the band take the stage, it is clear that it's going to be a killer show. Hook looks very impressive, he's wearing a t-shirt with the pulses of the CP 1919 pulsar on it (ie the cover of "Unknown Pleasures") and is holding his famous red Eccleshall bass guitar... Before playing the album in its entirety, the band played a few songs as introduction, "Dead Souls", the B-side of the single "Atmosphere", "No Love Lost" and "Leaders of Men", both from "An Ideal for Living", Joy Division's debut EP and "Digital", taken from the Factory Sampler (1978). Immediately, the audience began to move and to sing along.

Then it was "Disorder", the first track of "Unknown Pleasures". As a whole, the interpretation of the songs is very faithful to the originals but without trying to imitate them. Hook doesn't try to ape Ian Curtis' voice or attitude and the band has its own vision of the songs. The sound is heavier, more rock/punk-oriented then the original production by Martin Hannett, and this raw energy suits a live performance like this one perfectly.

Check the band playing "Disorder" below:

The highlights of the album are of course the most famous songs, "Shadowplay" and "She's Lost Control" and here, the first rows even indulge in a frantic dance/pogo and the atmosphere is really amazing. Obviously, there is a true chemistry between the members of the band and the audience is swept away by an irresistible wave of feelings and powerful emotions. At many times, we feel the hairs on the back of our necks rising.

When they finished playing "I Remember Nothing", there was a thundering noise all around the Trix to beg the band to come back. Hook played "Heart And Soul", followed by "Isolation", "Twenty-Four Hours" and "Decades". But it was with the two last songs, "Transmission" and "Love Will Tear Us Apart" that the concert reached its climax. Ironically, these are the same two songs that a New Order have been encoring with (without Hook) and I must say that I preferred Hook's versions from far! At the end, Hook took off his t-shirt and threw it to the fans. As a whole, it was a great show!

Watch the interview of Peter Hook before the show, in which he talks about Belgium, the concert at the PlanK in 1979, his activities with the Hacienda and his label, and his project to play New Order's music in January 2013.

This show by Peter Hook And The Light was a memorable moment and it closed the festival in the most appropriate way. It felt so good to see that there is a continuation of the tradition, with new blood bringing their energy to revitalize the scene. As a whole, it was a great edition of the BIM, with confirmed acts and great discoveries, in a very wide spectrum of musical genres, with an enthusiastic crowd and a flawless organisation by Bodybeats... See you next year!