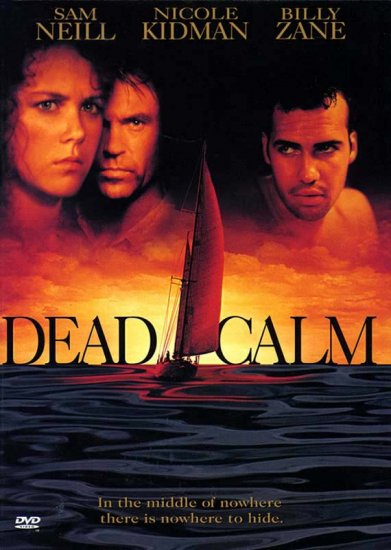 One of the movies that put Phillip Noyce (Salt, Rabbit-Proof Fence, The Quiet American) on the map was "Dead Calm" which was released at the end of the 80's.
Apart from Noyce's skills this movie was definitely one of the first movies where we witnessed the talents of Nicole Kidman even if back then nobody would have thought she would ever end up as one of the world's leading film divas.
"Dead Calm" is a typical thriller, like so many made back then (From The Hand That Rocks The Cradle, Fatal Attraction to name a few). But the interesting part is that the suspense is located in the middle of the ocean where no one else is to be seen and the water is both friend and enemy.
After having dealt with a family drama (the loss of a child) John (Sam Neill) and his wife Rae (Nicole Kidman) decided to give their lives some breathing space and head out on a sailtrip.
What started out as a romantic trip soon ends in a real nightmare. Once Hughie (Billy Zane) gets on board, this deranged serial killer has something else in mind other than just watching fish go by.
The strongest point is surely the script where Noyce succeeds in building up a Hitchcock-ian suspense.
Apart from the splendid Kidman, this movie suffers from bad acting by both Neil and Zane.
The serial killer never seems to be that dangerous and from time to time it looks like husband Neill doesn't care if Kidman gets killed or not.
But apart from that, a classic in its genre and now available on Blu-Ray.