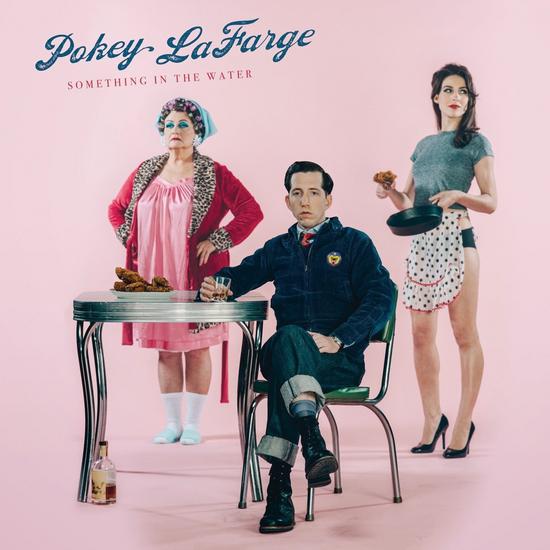 Something In The Water

There's no denying that American ragtime-n- soul urchin LaFarge kinda looks like the type of guy who'd call you a 'mook', whack you for your prohibition liquor then take off with a couple of broads in a beaten up Cadillac. So after six earnest albums, is he some kinda wise-guy trying for a seventh? Thankfully, given the strength of most of the songs on his first for eclectic roots-stalwart Rounder Records, it's a 'yes'.

Something in the Water may have seen him drop the South City Three suffix from his moniker but this is very much a band effort. LaFarge has written or co-written ten out of the twelve numbers with the sixteen (count 'em) musicians all responsible for creating a friendly, frenetic and fun album that still boasts plenty of references to old-time American roots, without compromising on quality. There's Western swing, ragtime, gospel, blues, Americana and Dixieland all over most of the album - you can see what attracted Jack White to the St. Louis singer when considering him for his Blunderbuss album (White enlisted LaFarge to vocalise on I Guess I Should Go To Sleep and then promptly signed him up for LaFarge's 2013 self-titled album on Third Man) - keyword, authenticity.

LaFarge tilts his hat in the direction of Hank Williams, Earl Scruggs, Jimmie Rodgers and latter-day JD McPherson (another true-to-form retro rocker worth investigating), with stompers such as the title-track, Actin' a Fool and Wanna Be Your Man but also lilting balladeering on Far Away and Cairo Illinois. Although his voice is built for hot-jivin' hillbilly hoedowns - an enriched vibrato-soaked soprano - he proves on the slower songs that he can croon when he wants. Tampa Red's All Night Long and Bullock and Whiting's When Did You Leave Heaven are given respectful covers that compliment the self-penned efforts perfectly.

Something in the Water is an enlivening good-time album that doesn't wallow in the blues or paddle in the shallow-end of faux Americana - it's a set that swims with the confident backstroke of an Olympic champion. His best to date.