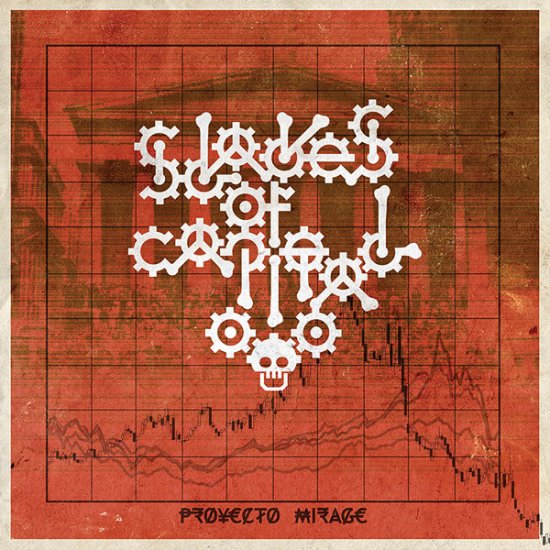 Every day we're getting newsflashes about the economic crisis that is going on in countries like Spain and Greece, even the whole world. Everyone has an opinion about it and tragic facts like these can sometimes inspire people and also artists. The fact that we have become slaves of 'capital' may be irreversible and the Spanish band Projecto Mirage speak up and to tell us what they think about it.

Usually it is Salt doing the artwork for Ant-Zen releases but here Gee Oh Dee shows us a plummeting chart with, on the background, a blood-red centre of justice. The tone has been set and the best way to make your dissatisfaction known is to strike out left and right with powerful beats! At the start it all sounds like a homogenous mire of industrial dance with a high level of techno. But if you are willing, there is quite a bit of variation to be found.

Cruising speed is reached with the harsh electro bombshells of The Blade Of God and Extinction To Evolve, that bear a lot of resemblance to Psychobitch because of Alicia H. Willen's vocals. Low Tech Droid, Nodo and Nicht are of a more rhythmical techno nature, very much like Winterkälte or Nullvektor. With the softer instrumental electropop of Flexitrack and Interlock we can catch our breath a little bit. The same for Lithium, but this one has some percussion, giving it a warmer character. It's, especially, during the second part that we hear a lot more electropop and that is new for this duo. A bit less agressive and as such more accessible but with enough stirring moment to convince all you harsh electro freaks out there.