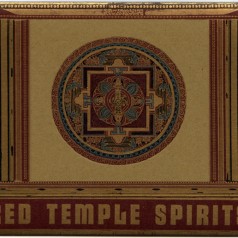 Dancing to restore an eclipsed moon/ If tomorrow I were leaving for Lhasa, I wouldn't stay a minute more...

Red Temple Spirits are not what you should call a popular band, but those who heard one note from them immediately got hooked on their sound. It’s difficult to categorize them as their psychedelic rock sounds indeed a bit like Pink Floyd, but there’s also a high dose of post-punk involved. It’s no wonder that they’re popular among Savage Republic-fans as in a way you can compare their music with each other.

Their excellent debut Dancing To Restore An Eclipsed Moon became a classic (well, kind of) from the American darkwave. Those who were addicted to Independent Records-sound embraced this Los Angeles quartet as well. On this album they covered (in an excellent way) The Nile Song by Pink Floyd and with this, they showed at once their influences. They also did a Pink Floyd-song (Set The Controls For The Heart Of The Sun) on their next album If tomorrow I were leaving for Lhasa, I wouldn't stay a minute more... and even a splendid version of Rollercoaster from 60’s-weirdo Roky Erickson.

Hearing an album by Red Temple Spirits is like one big psychedelic trip, it’s a great experience from the first to the last second.

Despite the high quality of their music, the band was doomed to the underground. Their albums were very hard to find and once in a while you could find a copy on E-Bay, of course for crazy prices. But the people from the French label Infrastition have now re-released these two albums onto cd. And just like it was the case with the vinyl back then, the package of this reissue is simply stunning. But you better hurry as it’s limited to 500 copies.