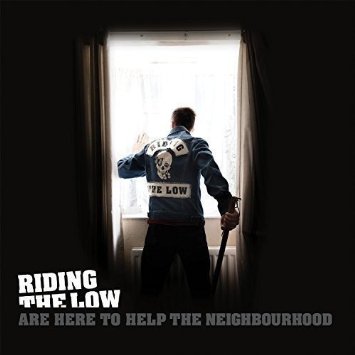 Are Here To Help The Neighbourhood:

Album number two for alt-rockers Riding the Low sees something of a departure for the Burtonians. They've grown up. They've (ahem) 'matured'. But all in a good way, not in a pipe, slippers and a cheeky-line-of-charlie-in-your-dressing-gown kinda way. Sure, there's all the firepower of the 2013 debut What Happened to the Get to Know Ya and all the lyrical couplets and musical twists that we've come to expect from an intelligent outfit. Now though, there's a rawness in them thar grooves. Bigger sweeping melodies, albeit from the school of hard knocks and the Brit-pop college of gurning, a variety of styles without aimless dabbling and choruses. Yes, 'choruses' - remember them?

While many other so-called indie pretenders have dumped substance for style, Paddy Considine's charges have grabbed life by the furry plums and squeezed them hard, riff by riff. No-nonsense belters include Sally Street Team, The Greatest Blast and the opener From the Top of the World, while things slip into (it has to be said) Charlatans, Shed Seven and (no, really) Monster-era REM territory with Meet Skanker, Sunshine My Son Shine and Beer Tears. Fuzzy jangling guitars and shuffle-beats a-go-go with neat witty lyrics - all good.

Riding the Low have gained a good reputation for live shows - including a recent Kendal Calling slot - and it's not hard to see why. Tracks like Heed and On Top of the Mayhem translate well on record and on stage, I'm certain, and wouldn't we all rather see a band like this on Jools than some dinosaur with a beard, donning a trilby and widdling on about hard life in Surrey?