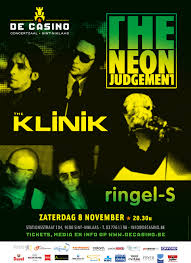 RINGEL-S, THE KLINIK AND THE NEON JUDGEMENT

Although I already saw The Klinik a few times, I didn’t want to miss their last concert ever on Belgian soil. The final concert will be in Berlin on 27/12/2014. When we arrived in St.-Niklaas Ringel-s was already playing for a while, but we immediately noticed the good sound quality. De Casino is a nice, cosy venue with a beautiful chandelier at the ceiling. The event was sold-out, so it was getting crowded. I am not familiar with the music from Ringel-s, but they were quite enjoyable. Geert Bogaerts is involved in this project with Jan D’Hooge, who we know from Vive La Fête, Implant and 32Crash. They play smooth electro that reminds me of Krautrock because of the German vocals. I heard some nice bass guitar playing and you could see that these men are enjoying themselves on stage.

The Klinik opened their show with Walking On Shadows. Opposed to their recent shows that I witnessed (Beverwave 2012, Rewind and BIM-fest 2013), the crowd wasn’t fired-up from the start. Although Dirk Ivens was energetic and determined as always, I guess it was rather due to the lack of space as people were packed in front of the stage. Once Hours and hours began the crowd started moving and singing along. After this they played two songs from the latest album which the people seemed to know well too. With the harsh Pain and pleasure the temperature raised even more. The enthusiasm of the crowd went crescendo when Obsession (with its fantastic percussion) and Sick in your mind (with its wicked overtones) followed. Peter “Liquid G” Van Den Bogaert was also enjoying the show. During Moving your hands Hilde Ivens mounted the stage and danced a while. Then some more pulsing beats followed with Memories. After that the band left and the crowd screamed for more. Of course they came back for one encore. The crowd went crazy on Go Back and that was it. The band left and the crowd didn’t get the chance to scream for more as the organisation quickly switched on the lights. And so it was finished too soon.

Although it started a bit slowly, it was a great concert once again with a great sound. It’s a pity that there will be no next time. Luckily we still can see Dirk Ivens with Dive, Sonar and Absolute Body Control in the future. By the way, he just released a new album with Sonar. And Borg we might meet again with The Juggernauts.

After The Klinik I went downstairs for a cigarette outside and a visit to the Wool-E-Shop stand. I noticed there were a lot of people from outside the gothic scene, so it seems that The Neon Judgement is popular with a larger public. TNJ opened with Too cold to breath. Classics as Factory walk and Miss Brown followed. Tomorrow in the papers and Concrete were played in different versions. You could say it sounded more poppy and danceable. The crowd was enthusiastic, even in the back of the venue people were dancing. Chinese black is a favourite among the goths from TNJ’s public (dixit TB Frank). Of course The Fashion Party and TV Treated were included too!