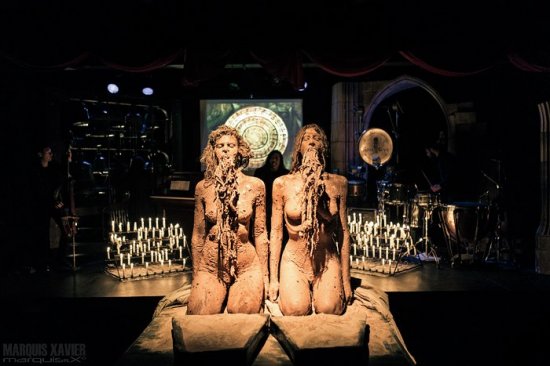 Review of the concert in Brussels on 19 January 2013

Created in the 80s by Olivier Tarabo and Claude Fenny in Rouen, ROSA†CRVX has become a cult band. Its music is unique, a cross-over of medieval and tribal sounds, combined with mysterious and hermetic lyrics. On January 19th, the band gave a concert at the Methuselah's Ball in the 'Theâtre des Deux Gares' in Brussels.

Having already seen ROSA†CRVX several times, including a memorable concert in the Eglise Sainte Croix des Pelletiers in Rouen, we were eager to see the band playing in a more intimate setting. Despite the relative smallness of the stage, all the equipment was there, including the carillon of eight bells, the organ and the automated drums (BAM). Better still: we found elements of the decor of the crypt where the band organizes its parties in Rouen.

From the first notes of "Vielles", the instrumental that opened the concert, a unique atmosphere, as only ROSA†CRVX can create, moved into the theater. The drums echoed the incisive guitar chords, which sounded like a bagpipe. We felt as if immersed in a dark ceremony, illuminated by dozens of candles. With "Invocation", the voices, Claude Fenny's organ and Antoine Boyer's 5 string electric bass entered the dance, while Vincent Kreyder supported the BAM rhythm with powerful percussion. As usual during this song, two of the three choir singers, Marianne Lachaux and Juliette Bates (the third being Caroline Delavault), came to the forefront to draw arabesques with their large flags, forcing the audience to back up a bit.

The intensity remained during "Adorasti", a composition which particularly highlights the exceptional voice of Olivier Tarabo. Always powerful on the verge of tearing, it evokes Gavin Friday (Virgin Prunes), but with a more devilish tone. At times, it sounds like incantations done by American Indians. Then it's "In Tenebris" with its beautiful piano riff and "Terribilis", which resonates to the beautiful sound of chime bells. Note that the band itself that melted the bells and built the carillon, a sign of craftmanship and authenticity.

The show is completed with very 'dark' videos of catacombs, crosses, demons or skulls. Like a Grand Inquisitor, Olivier Tarabo carefully cares for all the details of the show, coming and going between the microphone and the installation at the rear of the stage. After the threatening song "Hel-Hel", ROSA†CRVX played three new songs, "Tonitrvi", "Venite" and "Ante-A", which sounded impressive! The old songs "Aglon", "Moritvri" and "Svrsvm Corda" benefit from the band's coninuous efforts to improve the sound of their instruments and the production in general.

After "Miséricorde, "Noctes Insomnes" and "Proficere", came the long awaited moment: La Danse de la Terre (Earth Song,) the band's most impressive performance. Accompanied by the heavy rhythms and tribal sounds of "Eli-Elo", the two dancers, Marianne Lachaux and Juliette Bates, naked and covered with mud, began their mysterious choreography. Kneeling on a small podium in the middle of the audience, they took the dust in a tray in front of them and threw it at themselves with coordinated and repetitive movements. The clay and the dust were spinning around and spreading like an opaque cloud. This sacrificial ritual shows the suffering of the human body, fighting in vain against dust and ashes, to which it will sooner or later return. The performance is of a rare intensity, and leaves the audience petrified and in awe. Look at this unique moment in the video here:

After experiencing such a climax, we looked, fascinated, at the last part of the concert, which included the majestic "Omnes Qvi Descendvnt" and the mysterious "Vil". During the encore, ROSA†CRVX played "Ab Irato", "Incendere" and a fourth new title: "Nescit Nox".

It's clear: a ROSA†CRVX concert is a unique experience. The evocative power of the music and of the performances is such that the audience is mesmerized by the mystical depth of the concert. It's like a black mass in the dark days of the Middle Ages. A mystical ritual devoted to our human condition.

After the concert, Olivier Tarabo gave us an interview. Read and listen to it here.