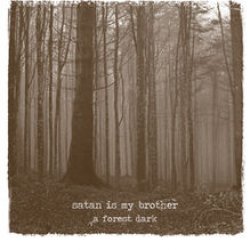 SATAN IS MY BROTHER

When a band decides to name themselves Satan Is My Brother, you might think that you're dealing with some teeny-bopper metal band but in this case it's different.
This quintet from Milan are making cinematographic jazz music or something similar. In 2007 they released, also on Boring Machines, their debut which was a soundtrack for a self-made movie, shot on a night trip on the motorways of their hometown.
Their newest album was initially a soundtrack for the silent movie "Inferno" and the result is an epic cd that features eight tracks with a length of 36 minutes.
It might be a short one but if someone ever told you that quickies are the best then they're right with Satan Is My Brother.
What you get here is an instrumental piece that balances between the dark mysterious feel of a David Lynch movie and the genius behind the instrumental Eno songs that were featured on the "Heroes" album by Bowie.
Sometimes jazzy, sometimes noisy, sometimes Krautrock-ish but above all a CD that blows you away.
One of the best things we reviewed this month on our pages.