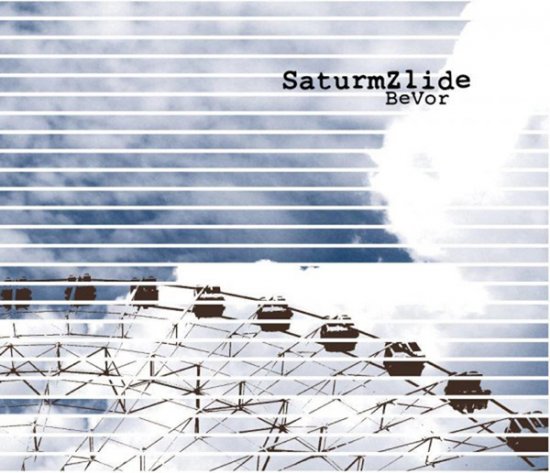 A newcomer on Hands, SaturmZlide ‎or Alexander Marco has earned his way in the industrial scene with merely one cdr on Fich-Art. Another new talent on Fich-Art is hyDrone, you can check him soon at Maschinenfest. So SaturmZlide is fresh talent, let's see what he adds to the harsh electronic world...

No unforgiving aural madness as Winterkälte, I guess you could describe it as a mix between the rhythmic techno/noise of Nullvektor and the floaty ambient soundscapes of L'Ombre. Not as dark as Hecq's 'Night Falls', it's spacier with some 5F-X pilot talk thrown in. Weird you might think, but Marco welds them together so tight you can't fit a needle in between. I can only think of a few minor flaws like the ending of 'Half Of The Planet' which stops a bit abrupt, but now I'm splitting hairs... The last song is divided in seven parts and takes about 25 minutes, a long ambient track spiced up with some great idm/noise.

But there's more then just ambient, 'Drifting' is upgraded with some psychedelic guitar by Andreas Hellriegel and 'Timerider' was written by, who else, Philipp Münch. You can't skip between those seven songs though, it's a mandatory ride...

Next reviews
IMPAKT! • Imperia
LAIBACH • Review of the concert 'We Come In Peace' in Oudenaarde on 17th September 2012
VNDL • Gahrena: Paysages Électriques
ROBERT HOOD • Motor: Nighttime World 3
S.P.O.C.K. • The Best of the Subspace Years
EWERT AND THE TWO DRAGONS • Good Man Down
THE BREATH OF LIFE • Whispering Fields
CRUISE [CTRL] • …Are Not What They Seem
PROMONIUM JESTERS • EP 2010
IN MY DREAMS • XII Reasons To Remember