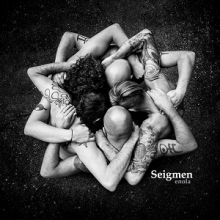 The alternative, industrial rock band SEIGMEN has not released an album since 1997. A lot of people will therefore know their other project Zeromancer better, the band in which Ljung, Ronthi and Møcklebust played. In comparison with the industrial rock of Zeromancer “Enola” sounds less bombastic and more synthesizer oriented. The songs have more room for melody and melancholy, but have the same feeling as the songs of Zeromancer. SEIGMEN has some great semi-ballads with a lot of feeling to offer. Big difference with Zeromancer is the fact that Møcklebust is now singing in Norwegian instead of English. It’s a barrier, but it also creates a fitting wilful addition. To get a good image of what SEIGMEN has to offer, listen for instance to the sing along ‘Utopia i Mine Armer’, the nicely built, more guitar oriented songs ‘Deus’ and ‘Trøst’, and the ballads ‘Ten Alle Lys’ and ‘Hvit StjemeHvit Støy’.