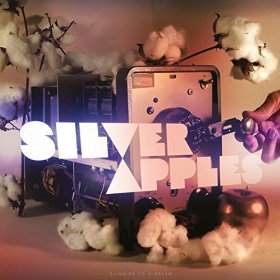 Clinging to a Dream

Alongside an extensive back-catalogue programme which sees The Garden, Beacon and Decatur get vinyl issues later this year, Simeon Coxe's trippy proto-electro Silver Apples project spawns a new album. Before celebrating 50 years in music in 2017 however, surviving member and founder Coxe has ensured his often-overlooked legacy continues apace with a long-player that's as bonkers and endearing as you'd expect. Think a mid-Western musical take on Karl Bartos, later Blancmange, recent Portishead, Plaid and the Radiophonic Workshop and you're about a third of the way there - the rest cannot be labelled.

Early single The Edge of Wonder kicks off proceedings and comes in two forms, the first a re-recording and the second the original 7" demo mix (personal preference - this version), while Missin' You is a delicate sliver of poetic proto-pop that sports a cute melody hook straight out of OMD's canon and a lyric for the unrequited.

Things get a little left-field from Colors onward, a string of tracks with oscillating found-sounds, hammer-horror synths, minimalist beats and hushed speech, the eeriest of which is The Mist, itself an unsettling fog of low-end threat and dubbed-out atmospherics. If this was labelled up as the new Burial dubplate, they'd be queuing around the block. As it stands, it's a stetson-wearing septuagenarian with an active mind and a penchant for weird things.

Susie is almost danceable in its bizarre way while Fractal Flow joins the opening two tracks as one of a trio of attempts at avant-garde pop, before Drifting drags us by the wrists into a closing cluster of genuinely freaky tracks that are best played than explained.