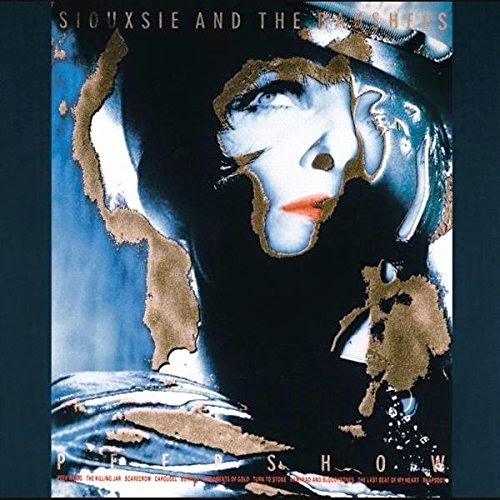 Golly jeepers/where did you get those peepers sounds more like a lyric from a '30s jumpin' jive classic, rather than a new Banshees album but in 1988, after a muddled Tinderbox left critics feeling cold two years previously and a covers-album alienated one or two fans,

Peepshow and its opening gambit single Peek-a-Boo surprised many. Constructed from numerous re-recorded segments and snippets from other sources, then popped through the mangler with Siouxsie's vocals added afterwards with different effects for each line, Peek-a-Boo is aural Marmite for sure. I remember really liking it but preferring the follow-up The Killing Jar which failed to chart. As for the rest of the album, it sounds like it was created by a band having fun, without losing the trademarks people fell in love with in the first place. Carousel brandishes an air of menace yet displays a certain amount of childlike qualities, while The Last Beat Of My Heart retains the tribal undertones of earlier works.

Ultimately though, Peepshow comes with some flaws - I've never been a fan of Ornaments Of Gold or Turn To Stone and they remain as forgettable as they did 16 years ago. The addition of Martin McGarrick's accordion throughout the album is a welcome distraction and overall, Peepshow is likeable without being outstanding.