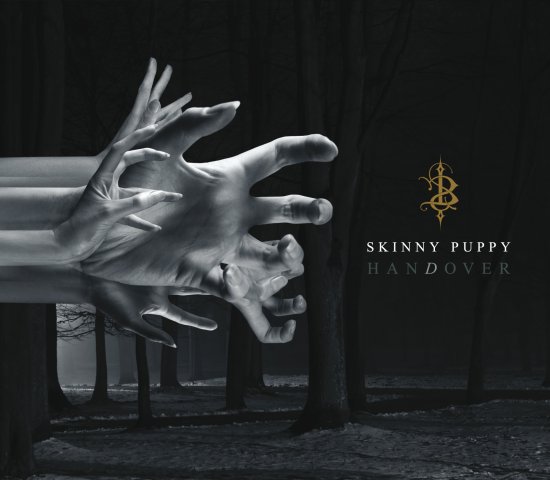 Due to the many clones we tend to forget the real thing. Indeed, apart from Front 242 or Nitzer Ebb, we guess Skinny Puppy must be the most copied band in the scene, but whereas many of their examples tend to forget that there is something like "evolution", frontmen/conceptualists Ogre and Cevin Key seem to be aware that you better change the concept from time to time.

Their 14th album, "hanDover" is inspired by the greedy financial organisations who seem to fuck up the life from the ordinary Joe and in a career spanning more than 25 years this album might not be their strongest but it's certainly one of their most innovating ones.

Those who are expecting to hear a reprise from anthems like "Smothered Hope" or "Assimilate" will probably categorize this album as a rather dull one. The indus-influences are of course still there but in such a way you could describe the newest offerings from this institute as a more cinematographic approach.

This album comes three years after "Mythmaker" and according to Key this album had to be different: "I didn’t want to write the record the same way as the previous ones, I wanted there to be fresh angles, both in the songwriting and the programming platforms. I was changing the whole element of myself just to see what would happen. In the end, I made something different, but it was still coming from me. I’m not interested in looking at my accomplishments and myself. Like any electronic music fan, I look at the big question: Where is it all going?", the man says.

We honestly don't know ourselves but what we do know is that after Ogre's great solo-offering earlier this year, Skinny Puppy have once again delivered an album that definitely matters even if it's not the same band that once delivered the Remission-EP back in 1984. The anger's still there, the melancholy as well and sadly enough the dark subjects as well.

No one will disagree that you can easily come up with a stronger album by them but at least they once again changed their borders and who knows we'll see this album as a classic in 2020 but along with 16Volt they delivered one of the best electro-indusalbum of this year.

Perhaps not a surprise to read, but certainly surprising enough to hear this from someone who already gave up on them.

Next reviews
IN CAMERA • IV Songs + II
A THOUSAND SOCIETIES • Le Crépuscule Des Idoles
SECTION 25 • Invicta EP
DICEPEOPLE • It Gets Darker
AUTODAFEH • Act of faith
THE OPEN UP AND BLEEDS • An act of love and violence
HECQ • Avenger
MASCHINENFEST 2K11 • Or how to destroy your senses in a few days time...
SYNAPSCAPE • Traits
ZARTBITTER 16 • Richtung Zukunft