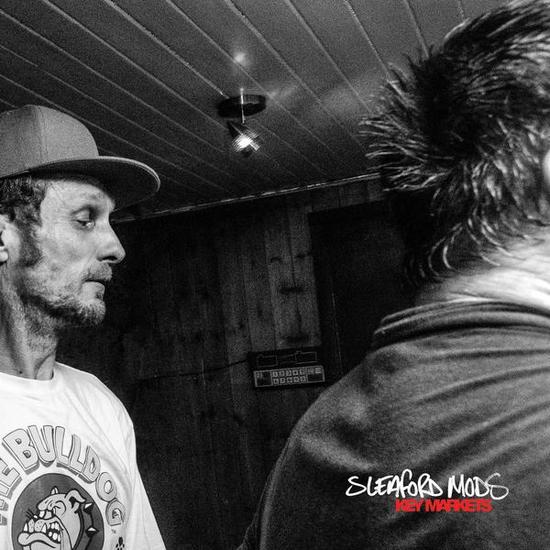 From being largely confined to the clubs of the East Midlands to turning a marquee at Glastonbury a hothouse of sweat, swearing and swaying, it's been a steady rise for likeable Nottz spitters Sleaford Mods. Key Markets might be the album that divides opinion, however. As the loyal fan-base will no doubt remain, the hipsters will move on to their next idols, leaving Jason Williamson and Andrew Fearn to face their next audience - the mainstream, the charlies, the chancers and the very subjects of previous rants.

Not that any of this matters when you've got an album as sharp as this. If Divide and Exit suffered for being a bit too samey musically, Fearn's beats on here are as tight as a moth's arse while Williamson's rhythmical rhyming couplets are as brash, bleak, hilarious and verbose as ever with one or two noticeable restraining orders served on the usual 'fucks', 'tits' and 'cunts' present on much of the album. No Ones Bothered might even make the One Show one day. There's a thought. Sorry about that.

The highlights on Key Markets are many - the politically-inclined Face To Faces portentously remarks that '.. in our failure to grab hold of what we have... we have lost the sight..., we have lost our fucking minds alright..' while Cunt Make It Up is a hybrid of the surreal and the ridiculed not unlike The Fall mixed with fellow East Midlander Pitman's barbed but comedic rants. And all the while, those insistent bass-lines and tin-pan drum patterns batter your eardrums like a landfill sound-system.

At the time of writing, I read a review of Key Markets by London's Evening Standard. Predictably, they dismissed it as uninventive and that it 'doesn't demand repeated listening'. Which is precisely one of many reasons that you, the unsure, should pick up this bang-on album and bang it on. Loud. The bass-line and beats on Rupert Trousers are worth the admission fee alone. If only half of the slack-trousered kids standing on the sidelines had a fraction of this sort of venom in their creative juices, they might form bands like this and unnerve the unhinged.