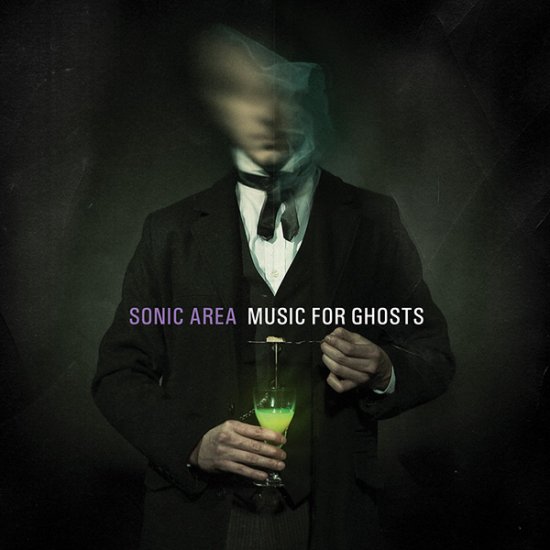 Half a year old, here is the (not so new) album by Sonic Area. A first on Ant-Zen, the French Arnaud Coëffic aka Arco Trauma is by no means a newcomer and you might know him from the cyberpunkers Chrysalide. However, his first project was Sonic Area and to materialise his music he founded the label Audiotrauma. Best known artist featured there is probably on the split album where he works alongside Punish Yourself.

But no cyberpunk here, although it would suit perfectly as soundtrack to Blade Runner for instance... Songs like "The Infernal Clockwork" and "Eureka" are frantic and bombastic, like Coil's LSD on speed. Spaceships slowly break trough the clouds during "Inframonde" and once the aliens arrive near the city, the hero, an android gunslinger of Mexican fabric does not even blink. Yes, "Haunted Hall Motel Ballade" has that same coolness of the unlikely hero in "El Mariachi". Tunisian flutes and rhythms launch an exotic mood in "The Magic Storytellers".

An introspective mood arises in "Middle Night Ballet". Have you heard Ben Lucas Boysen's soundtrack for Restive yet? Well it matches his and Nils Frahm's quality. I wonder, shouldn't Arnaud start up another project, playing just piano? Around the middle part of the song, it shifts into this eerie ballroom scene, very much like the end scene of The Shining, where you get a view of Jack Nicholson in an old 20's picture. The final part of the song is Arnaud reciting a text, heavily distorted.

The end song is fitting, with lush baroque music combined with martial drums. A very good album for an evening in your comfy chair and a Riedel-Hennessy glass of cognac...

Next reviews
SAVAGES • Review of the concert at the Botanique in Brussels on May 13th 2013
GEISTFORM • Data Transmission
CHELSEA WOLFE • Review of the concert at the Trix in Antwerp on May 6th, 2013
THE DEVIL & THE UNIVERSE • Evoking eternity ep
FRIENDS OF ALICE IVY • We Are As Ghosts
EX_TENSION • Le Seuil De Tolérance
• Review of the REWIND Festival in Ghent (DAY TWO) with VNV Nation, Diary of Dreams, Vomito Negro,.. (Ghent, 13 April 2013)
RADICAL G • Wasp EP
IGORRR • Hallelujah
IMPLANT • The Productive Citizen

Other reviews from SONIC AREA
SONIC AREA • Eyes In The Sky