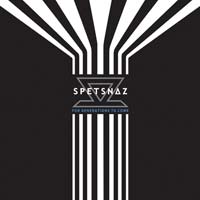 For Generations To Come

Spetsnaz has always been a project to follow. The first album Grand Design was released in 2003 and made me sceptic: was this a Nitzer Ebb-clone like there have been so much of? Totalitär (2006) confirmed the band to be determined to continue exploring the oldschool EBM-sound. Deadpan (2007) was the first album after their short split-up, but was no shot in the dark and hit target.

And now, after 6 years, we finally get the new full album. The oldschool sound has not changed a bit and is almost a certain success. Stefan's beats keep hitting hard and Pontus is still the perfect jockey to abet the crowd with his forcing vocals. "Freefall" and "True to form" are stompers for the stormtroopers, while tracks like "Onwards" or "Mine" even grab back to the older Front 242-sound.

"For generations to come" comes close to what I feel should be the perfect EBM-album: hard, beating, no compromises: straight forward with lyrics that kick butt.

And now: into uniform and head for the floor or mushpit: Spetsnaz is back!