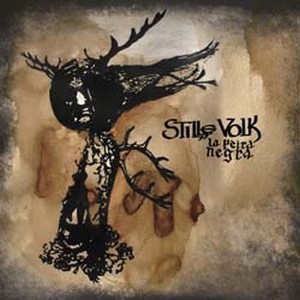 The roots of STILLE VOLK is originally (folk/ pagan) metal, but the music on “La Pèira Negra” is pure (pagan) folk. The French can even be compared with fellow countrymen Gaë Bolg And The Church Of Fand. Especially the chorus lines are similar. STILLE VOLK is however more typically folk oriented and is not as bombastic. Songs like ‘Dementis Maudiçon‘, ‘Sous L‘il Du Spectre‘, ‘L‘éveil Du Spectre‘ and ‘La Litanie Du Pétrifié‘ have however the same inspiration (especially with the use of horns and typical organ sounds).
The music is sometimes a little disorderly, but in general the songs of “La Pèira Negra” are good enough to pleasure all folk/ medieval fans. When the band chooses a more bombastic approach and use the voice as a real instrument the songs get really interesting. Listen to the catching and danceable ’La Forêt Gorgone’ and the well built ’Heaume De Lichen’.
In the end the metal inspiration is demonstrated with a fine cover of Mercyful Fate’s ’Come To The Sabbath’. “La Pèira Negra” is in the end a pleasant folk album filled with inspiration and fun.