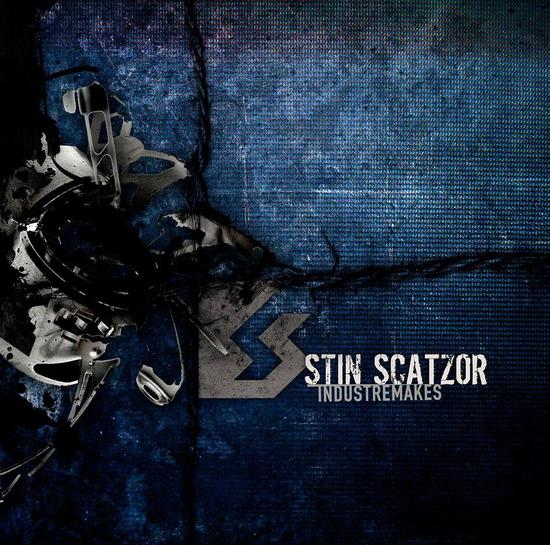 I could already listen to the originals and just got the final version with the extra remixes... clean up the room and start to shake... Stefan Bens did a great job, once again (After Lescure13)

'Broken Mirror' is a nice opener, the guitar sounds great, just as the voice! This is a great clubber! Love the lyrics too! 'Dressed in Leather' is a favorite one of me! Love the beats and the aggressive voice! 'Someone's Memory' is a fast headshot, whit balls and great guitars! Love the synths & the electronics, melting perfectly with the aggression and strobo lights fighting with the dance floor. 'Hellgium' starts really like a great harsh one, love the guitars and the angry beats! The lyrics are filled with hatred and anger and as someone from Belgium, I know what the song is about and understand and feel the real anger and agressivity in this song. It's a real Stin Scatzor classic! 'Let Me Rot' is a typical Stin Scatzor song, with the raging attitude and ditto lyrics. Fastly followed by the hard hitter 'Inside the Machine'. Love the beating sounds and ditto guitars. I can see them perform this one on stage, with cool strobo active! 'I am the Underdog' is how I see this band and you have to read the interview to see if I'm right. It's a great song, with great beats! Once again the guitars play an important role, just as Stefan's voice! This is really licking of the honey from my fingers like Winnie The Pooh does it after emptying a nest and stealing all the honey! 'The One I Trust' gets a more clubby sound, however the aggressive vibe stays, just as the great guitar! This is the end of the regular songs and I really ask myself how is it possible that this band doesn't get a higher position in the charts or doesn't play at all the big festivals...

None less but 9 remixes and I'll just put the one in the list that somehow made me want to review them or give them a spot:

'I Will Die (remake by Hynner VS Hant1S3)' gets an ad of a strange Arabic voice and a bit of a more rock'n Roll sound with real drums and yes... even some real drum'n bass! Really funky shit! 'Inside The Machine (remake by Drone 24-7)" gets a more melancholic sound and a more cleaned up and commercial sound. 'Still Alive' (remake by CTRLER)' stays close to the original with the ads of some nice electronics! 'It doesn’t Matter (Remix by Acylum)' sounds great, starts nicely industrial minded and goes on that way. This is a hard club hitter! Loved it! 'Vernix Caseosa (remix by Wynardtage) is also a good one, for sure because I know the original well enough. This one really improves the original, which was already a strong one! 'Hellgium (remake by Hioctan)' sounds like an Hoccico versus Suicide Commando remix! Love it, sounds very cool! I would have worked on a higher tempo, but in the end it's fine with me!

I hope that this one is indeed not the final resurrection! All the quality is there, so it's up to the record label and all up to the fans and the scene to get this band where it belongs!

And Stefan Bens is also part of this great one: