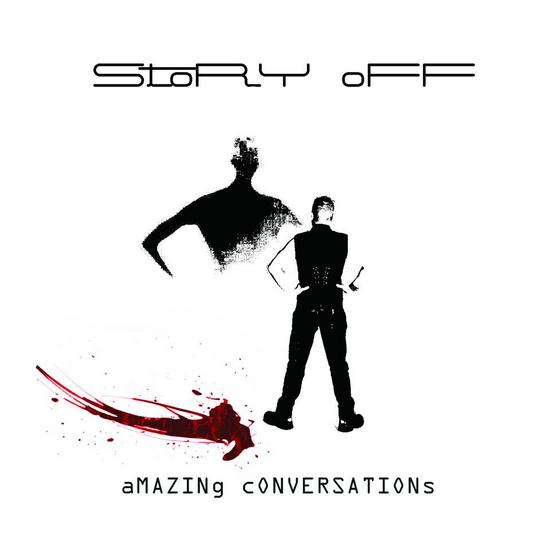 Story off is a side - project from ‘Chesko’, yes the front man from the band ‘Der Klinke’. The name ‘Story Off’ is chosen because Ches thinks our lives are more and more dominated by the social media, who all have ‘new stories’ to tell every day, and so it would be nice to have a kind of switch to turn them off. So no more stories …. ‘Story Off'

Had the luck to see this project live, and I really liked it. There is musically a big difference between ‘Der Klinke’ and ‘Story Off’ , this sound is highly minimal, pure and dynamic. Favorite on the album is the title track ‘ Amazing Conversations’, minimal synths and sounds with the scary voice by Chesko in a perfect match. The track ‘ The Dance Of Death’ could easily be made by a band like ‘The Neon Judgment’. Lots of songs on this album have a kind of 80’s sound. Personally I like this kind of catchy rough electronic sound. Tracks like ‘ Change’ an ‘Fear’, are a translation of moods combined with experimentation. ’99.69’, is pure minimalism and could easily be used as a movie soundtrack. Ending with ‘The Selfreflecting Image’ , maybe the most up-tempo song, and even slightly danceable. In the final track ‘Closing Time’ , I even discover some old ‘Klinik’ influences, this song is slowly build up and comes alive after a minute, great track!

So this is a very nice first album, and if you like a minimal and pure sound with lots of 80s influences then you should have a listen to it

Side A : Intro / Amazing Conversations / Again / The Dance Of Death / Change / Slow Train To The Other Side

Other reviews from STORY OFF
STORY OFF • Facing Forward