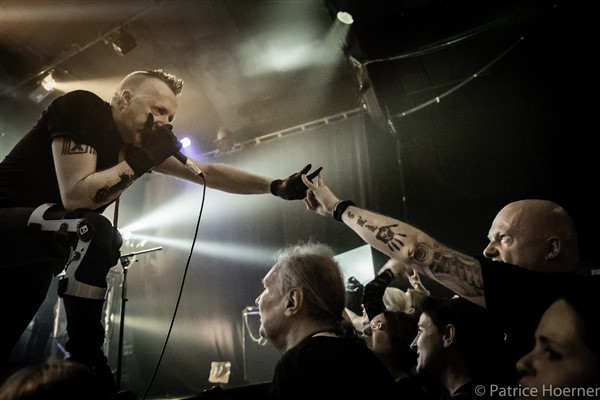 I’ve been waiting for this one for quite some time and I must say, it was a great night. Arriving at the venue at about a quarter past seven wasn’t a bad idea, as the line behind me grew pretty long. Happy to have purchased my ticket months ago as well, as I wouldn’t want to miss out on this one!!!
A bit later than announced (probably because of giving people the chance to get in and not having to miss out?), Super Dragon Punch !! entered the stage. You could really sense and see, they were more than ready to throw a party, and they did. The vibe between the three of them is awesome, it’s obvious they’re good friends and that also shows as they have a great interaction with each other on stage.

I’ve seen Super Dragon Punch !! a couple of times before, so I know how loud Jérémie gets live, but for those who might only know the songs from the EP “Shatter”, this change in vocal use might be (a bit) surprising. Yet, in combination with Sem’s bass playing, it came together nicely. Not to forget about Noemie, who handled the keys, as well as a nice bottle of Kraken, which was shared with the audiance.
Along with the songs from the EP, they threw in a bunch of other songs, which were to the liking of the audience (and myself) as well, making this a long and very enjoyable set.

Next up: Ambassador 21. It was the first time that I’ve seen them live and I must say: they came on like a hurricane to me but a good one, even though I stood more at the back of Magasin 4 and missed out on some of the interaction they had with the audience. I stood and watched and let it all their hardcore industrial come in. I must say, Natacha A Twentyone has a powerful voice and in between all those guys on stage, she fit right in, standing her ground, owning the place. I like that kind of firmness in a woman. Even when I didn’t understand a word of it, “In Love” sounded far from being romantic. The song I enjoyed the most was “Fuck All Systems”. The statement alone grabbed my attention, I can’t agree with it more!

After the powerful set, it was time for our very own Suicide Commando. As if the evening wasn’t extremely energetic enough, Johan added to that pile with awesome songs as “The Pain That You like”, “God is in the rain” , “Cause of death: suicide” (which teaches us, that during that song, 6 people took their own life) , “Love Breeds Suicide” and of course, they couldn’t leave without all time clubhit “Hellraiser” but brought in a new version, which can be found on the Hellraiser 2019 EP, that was released a couple of months ago (review can be found elsewhere on the site and in the 35th paper issue of our Peek - A - Boo magazine ). Whoever thought that that was the end, underestimated the fans, who were screaming loud for an encore, which was given by the guys in the form of the very energetic ‘Die Motherfucker Die” and “Conspiracy With the Devil”
Whoever thought a moshpit was only to be found during metal concerts, was terribly mistaken, as the fans of Suicide Commando squished me more than just a couple of times, between themselves and the stage. Johan even went for a little crowdsurf himself.

I highly recommend Magasin 4 for a night out. Entry fee to see 3 awesome bands was only €10 and drinks are a very reasonable price. Yes, cheap even!!! As it should be. Getting my still water for free from the tap, whilst, a week before, I payed €2,50 at an unmentioned (gothic) event for still water, made for Magasin 4 becoming one of my favourite places to go out.

Tired but very satisfied, I made my way back to my hotel. Good times, great evening, made a lot of awesome memories. And new friends!