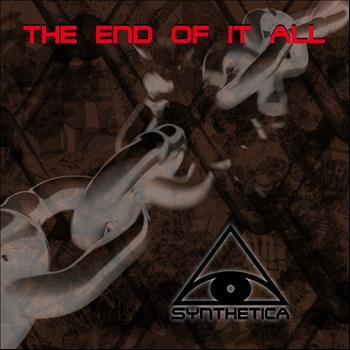 The End Of It All

You shouldn't blame yourself if you have never heard from them before, as this threepiece-band from Holland were only founded in 2011 right out of the ashes of Nafta-2, a Dutch electro-wave act.They're not the ideal sons-in-law (we hardly ever review such types anyway) as they believe that everything is going to end one day. They're probably right and if it happens that they misread their Nostradamus-book, they still have offered us quite a good album that saw its release on Danse Macabre.

The album features ten tracks and they're all good. Nah, I don't say this because someone promised me money to write such things, but simply because every track got a hold on me. Seek no originality as you won't find it, but most of the tracks will remind you of the old Project Pitchfork-sound and that's a good thing, not? Their music is beat-driven (man it are loud beats!), but it's beautifully surrounded with a sound that is influenced by dark wave stuff. If The Cure would ever decide to become a Suicide Commando-copy, I guess they would sound like SYNTHETICA.

Most of the tunes are sung in German (yeah, in Dutch would have been a bit silly) and I guess they would fit perfect on the market over there.

Everything's fine, apart from the dreadful cover. Choose another one for you next cd. Well, told you I'm not paid for this...but give 'em a chance anyway, they deserve to be heard.