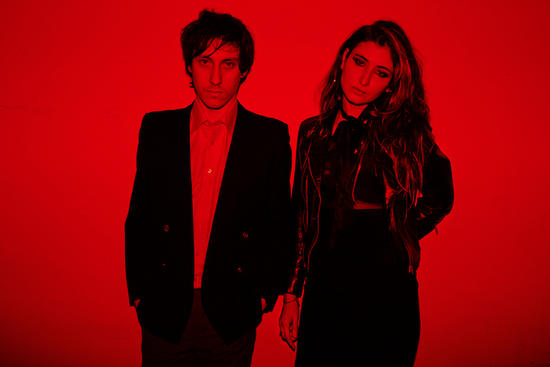 It's my latest big crush. Tempers is an electronic post-punk duo based in New York consisting of Jasmine Golestaneh and Eddie Cooper. This year, they have released two 7' singles on the famous PENDV SOUND label and their potential is huge.

Think of the gothic-dark emotion of Chelsea Wolfe combined with shoegaze sounds à la The KVB, plus a minimal postpunk feeling reminiscent of The Kills and you get a fantastic recipe, which I could call "Shoe-wave"...

“Eyes Wide Wider” is a softly sinister track that does not fail to hypnotize with its reverb-drenched guitars and haunting vocals. A moody, three-minute pulsong track with lethargic but lush echoes, it throws one under a heavy haze while delivering a jolting punch. Its B-side “Hell Hotline,” also mixed by Damian Taylor (Trust, Bjork, The Killers) is its more upbeat counterpart, an infectious number and dancefloor filler.

The second single, "Strange Harvest" goes even further: the melodies and atmospheres are even more addictive, with a verse sung like Lana Del Rey and a distorted chorus reminiscent of Siousxie & The Banshees. The B-side is an acoustic version which suits perfectly PENDV's dark-folk style.

Tempers will support Eraas in Opwijk (Nijdrop) on 20th November, in Ghent (Charlatan) on 21st November and in Köln (Tsunami) on 25th November.

To buy the singles: check here.

Other reviews from TEMPERS
TEMPERS • Service