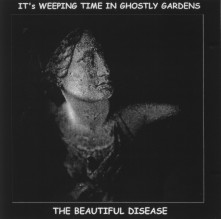 It's weeping time in Ghostly gardens

This record is originally from 1991 and has reached my desk now. If I wouldn't have checked it out I would have tought that it was the newest project from Goethes Erben. The sound and the voice have at least a lot of common points. So the least of things you can say is that it was mainly influenced by Goethes Erben. It's very athmospheric, dark, romantic, filled with emotions and has very poetic lyrics. However this is only a demo cd: it sounds as if it was recorded in a professional studio anno 2012. Downside is that there are only 5 songs on this demo, but still enough to get a good taste and get to know this band who is still active.

Next reviews
• The Lost Coast Tapes
SIMON BALESTRAZZI • The Sky Is Full Of Kites
CHRIS WATSON • El Tren Fantasma
LUYAS (CANADA), EWERT AND THE TWO DRAGONS (ESTONIA) AND I GOT YOU ON TAPE (DANMARK) • live at Club Trix, Antwerp, 8/12/2012
ADAM ANT • Review of the concert at Zappa in Antwerp on 7 December 2012
DAVID LYNCH • Eraserhead
DATE AT MIDNIGHT • No Love
AUDIENCE KILLERS • Footprints And Hearts
THE IMAGINARY SUITCASE • Here's to those we could not save
MUSHY • Breathless