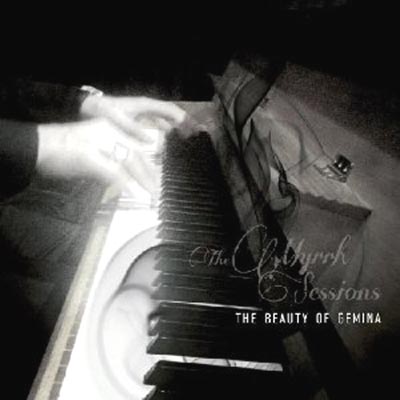 The Swiss darkwaveband The Beauty Of Gemina are a very fine example from what a band can achieve if they believe in themselves. When their first album Diary Of A Lost came out, almost no one cared about them. But four albums later (well, actually five if you count this one as well) baritone singer Michael Sele is along with his band on top of all the current gothfestivals. As they can rely on faithful dedicated fans, they also can experiment a bit and that’s exactly what they’re doing on The Myrrrh Sessions which can be best described as The Beauty Of Gemina going unplugged. A gothband that is making acoustic tracks? Well, in the past Wayne Hussey did it and Michael proves that he can do it as well.

Such a release is certainly not without danger as you have to rely on well composed songs if you don’t want to go flat on your face. And secondly, today the unplugged-hype is luckily over. But no worries, as this unusual album proves how great the songs by The Beauty Of Gemina actually are. They can’t hide themselves behind a wall of sound from guitars as these versions are naked to the bone. Through this album you rediscover their gems in a special way and some classics are suddenly getting a second life.

Just listen to Rumors and you know which classic the band has penned down. The Beauty Of Gemina are not afraid to add some unusual styles (it goes from jazz to blues, and the breathtaking song Kingdom Of Cancers sounds even a bit Jacques Brel-like) and that’s what makes The Myrrrh Sessions such an adventurous album. Some will say that The Myrrrh Sessions has the quality of a Nick Cave and somewhere that’s true.

Besides the well-known anthems, there are two brand new songs and a stunning version from the Talking Heads-classic Listening Wind on here.

The Myrrrh Sessions is perhaps not exactly the album we expect from The Beauty Of Gemina, but due to its class and originality there’s only one word for describing it: a triumph!