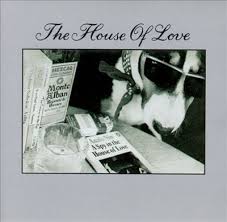 THE HOUSE OF LOVE

Spy In The House Of Love

When I recently contacted Terry Bickers asking if he’s not willing to take part in our successful series of albums that changed a life time, I was overwhelmed that he answered me that at the moment he was busy in the studio recording a new album by The House Of Love. The first thing that went through my mind, apart from some joy, was that the world of today is in desperate need of another House Of Love album.

Nah, it’s true, the world hasn’t forgotten this genius band whose sound was dominated by melodic shoegaze guitars and the weird, almost angry voice of Guy Chadwick. Once in a while you can hear The Beatles And The Stones and Shine On on your radio, but that’s it! And that’s so wrong, as this band did so much more!

There was of course their legendary debut album that was hailed by the late John Peel (oh, we miss you sir!) as simply genius. But the other albums were excellent too. We all know that after the first album the band was too small for two geniuses. Terry formed Levitation and Guy went on with Pete Evans and Matt Jury. As we’re waiting for the third album of the (reunited) House Of Love, we look back on Spy In The House Of Love.

No one really knows if it’s the real title of the album, but because there was a picture on the cover with the same titled classic by Anaïs Nin on it, it was easier to have an album in your collection with a real title, especially because their second album was already named “the one with the butterfly”.

This album features some songs with Terry, as it is a collection of B-sides and lost studio tracks. They’re almost completely forgotten, but the 14 songs all have one thing in common: they’re the most beautiful tracks ever written!

Scratched Inside delivers (well) a scratch to your soul, Baby Teen is a song that’ll drive you mad, if you never had the urge to smash a mirror with your head then you will after hearing Cut The Fool Down, you’ll play air guitar on Ray and you’ll dance till you drop on Marble.

Oh, you can do so many things with tracks by The House Of Love. Rediscovering them, should be your first concern!