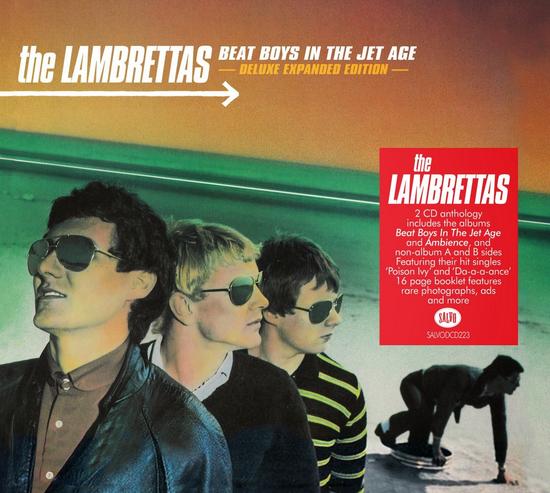 Joining the seemingly endless conveyor-belt of fresh-faced Mod-pop bands in the late '70s, Sussex cohorts The Lambrettas were better than most and were deserving of their year or so of fame, be it intentional or otherwise.

This package gathers up both of the band's studio albums and resultant singles and b-sides, rounded off with informative sleeve-notes and memory-jogging images and sleeve captures. Hit album Beat Boys in the Jet-Age was a spunky half-hour or so of neck-nodding 'yoof' anthems such as the title-track, Cortina Mk II and the glorious cover of Poison Ivy, the band's inaugural chart-hit originally written by Lieber and Stoller, as well as the mildly-controversial Page 3, renamed to Another Day (Another Girl) after the Sun declared the song's honourable intentions to be 'undesirable' for a family newspaper (you've got to laugh at this hypocrisy). Despite sounding a bit like The Jam, circa News Of The World, the single stiffed anyway. Perhaps the band's crowning glory on Beat Boys remains their second hit Da-a-a-ance, an uplifting anthem in the vein of The Vapors' Jimmie Jones or Secret Affair's My World.

Disc two is better value for money and contains most of the band's entire output including early debut-single Go Steady, the second album Ambience and later singles such as their brave attempt at Jefferson Airplane's Somebody To Love. There's no Young Girls from the Decent Town EP though. The transfer of Ambience is a little muddy in places but it's great to hear how The Lambrettas admirably steered themselves away from the dying Mod scene with an album that showed a level of maturity not found on the debut. Indeed retrospectively, single Good Times sounds more like Spandau Ballet had they collaborated with Comsat Angels, rather than The Jam, The Chords et al.

Subject matters are darker - "No more busy streets/just shared apartments" from Concrete and Steel highlights music's despair at The Man's desire to destroy and progress. It's a fine song, nonetheless, as is their homage to the urban spread of bright lights and redevelopments in London on Written To Neon. It's telling that Ambience's second single Decent Town heralded the band's first 12" release - there's something vaguely danceable about it, yet the song paled against the synth-pop and New Romantics monopolising teen-discos back in the day. A shame. By Somebody To Love, they'd discovered early Talk Talk by the sounds of things, replacing their guitars and Parkas for syndrums and Levis.

Overall though, despite not setting the world on fire, The Lambrettas quickly appeared and disappeared within the space of three years and left a solid legacy that includes at least a dozen really special songs. Good call.