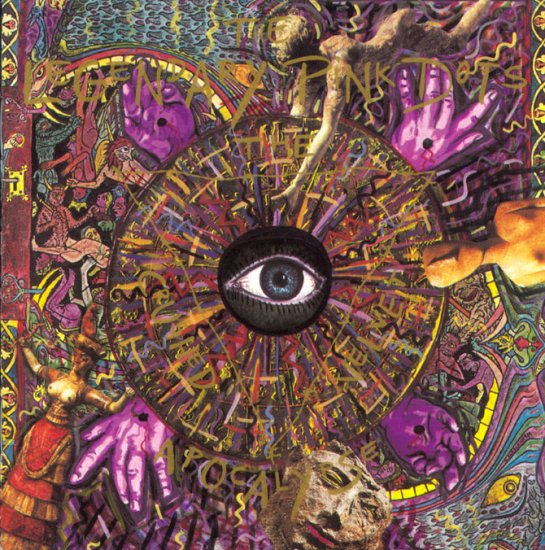 We assume it's not the easiest of things to come up with the best album from a band whose career has been spread over three decades but many fans tend to pick up 'The Crushed Velvet Apocalypse' as being the masterpiece of The Legendary Pink Dots and they'd certainly be on the right track.
Twenty years ago it was released on PIAS and even if lots has happened with the band (the usual people come and go type-thing, not to mention the decreasing public interest at gigs), Soleilmoon has decided to give this album a well deserved reissue treatment.
Remastered by Pink Dots' soundman Raymond Steeg and the addition of the amazing 'Princess Coldheart' 12" makes this reissue an amazing welcome in today's music scene as, simply, this was a band at its highest peak.
Even if their voice has always been identified by Ka-Spel's apart voice, this British-Dutch band had always an intriguing sound that's been made with elements of nu-psychedelica with a goth/new wave feel and this can be heard very well on this album.
Provided with some concessions, you can say that The Legendary Pink Dots were providing us with what can be described as pop for outsiders, as we can't help seeing songs like "Just A Lifetime" or "I Love You In Your Tragic Beauty" as genius pop songs.
Of course the kind of pop for those who saw all the black corners of this world.
Maybe it's also the perfect album for those who always thought The Legendary Pink Dots were a bit too experimental for their taste as this one will no doubt be their most accessible.
A special mail-order only edition of 200 hand numbered copies in a purple bag, with postcards and die-struck label pin is available from Soleilmoon’s Speaker Fire and the band’s online-store.