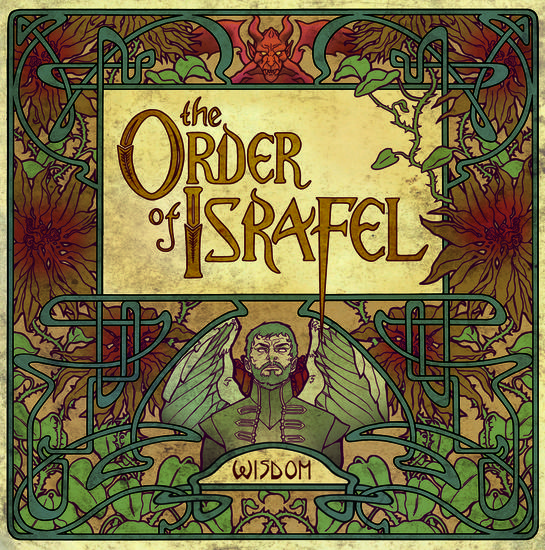 THE ORDER OF ISRAFEL

I should have known when looking at the album artwork that this one would be something different to swallow, but I was tempted by the first track.

Wisdom is a nice retro 70's-track, even with an 80’s-touch: a doom track with a clean voice. Mind you, it’s all worked out pretty well and contains a rich sound with enough variation that sucks you into the album. The sound is also very hypnotic, with some folk and hard rock parts. It's a pretty epic track with lots of twists.

The Black Wings A Demon starts with more fire and is simply the best track on the album. The Noctuus is a slow track. I even sense some Indian- and folk influences in The Earth Will Deliver What Heaven Desires. The acoustic part is nice, but the vocals are not delivering the quality that is needed for a track as such. The campfire-feel is nice, but the vocals ruin it all a bit.

The Order is a short one and could be used as opening track for their gigs and by the end of this sentence the track is over...

Born for War could sound perfect, but once again I don't like the vocals that much, simply too Oasis!

Promises Made to The Earth is an epic track that lasts almost 16 minutes. It has some good moments, but I'm getting distracted after a while.

The Vow is simply what it is. The last track Morning Sun (Satanas) is not making me happy either.

I know that these guys have their fans. So what? They have quality, otherwise they wouldn't be signed to Napalm Records...