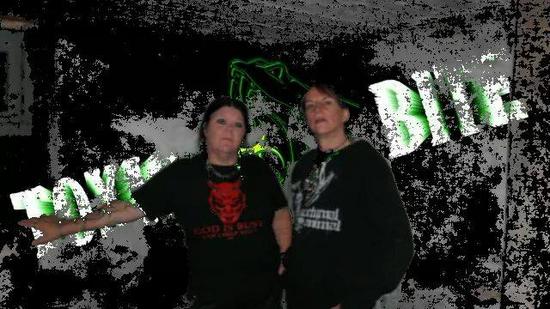 In times of transnational music, I came across the project “Toxic Bite”.

The German/Dutch band was started by Angie Thieken aka Witchy (vocals) and Michel Blanc aka Doc Feel (programming) in 2013.

In addition they started a co-operation with the US American band “Cryptic Dawn”, a Pennsylvania-based project by Matt Havens (https://www.facebook.com/CrypticDawn717?fref=ts). The song “Let’s cook” won’t remain the last coup of the joint venture called “Cryptic Bite”. We can be curious about what’s coming up next here.

With the song “Dead like me” Toxic Bite finally found its way and style. A mixture of everything. It’s hard to find one single expression to describe Toxic Bite’s music. Let’s put it that way: you can find Hell Electro and Powernoise elements in all their songs, combined with a generous portion of individual marks.

The recent song is called “Show your middlefinger” and was released on March, 6th.

All their songs are available as free downloads and video taped by Deano Schmitt. There is another announcement planned for May, a song release on a sampler. But a definite date has not yet been termed.

Currenty Toxic Bite is in quest of a label to publish their work.

Here is the Toxic Bite discography:

For more information, let’s have a look here: