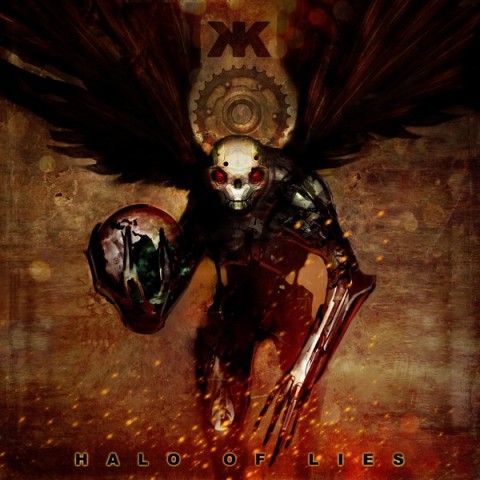 After the openingtrack Welcome To Sin City, we're on a 10 track rollercoaster, of which we don’t even get time to come off. End Of days, Blitzkrieg Galaxy, Halo Of Lies,Trakktor, Spitting On Your Grave, etc.., track after track we get run over by a bulldozer, and I am sure that most of them will appear on several playlists at parties.

My favourite tracks are Blitzkrieg Galaxy, a little splinterbomb with fantastic distorted vocals and, to me, the best track on the album, and Trakktor featuring a brilliant melody which makes it cool to shout along!

On the second cd, yes it’s a double album, we get several great remixes by bands such as Angst Pop, Kant Kino, Ordo Rosarius Equilibrium, and a few lesser known names in the scene, but they all did a fantastic job, making the second part of the album a very nice extra.

I would love to see these guys live, just to see if they can transfer the power of this album on a stage.

Must buy for sure!

Next reviews
KANT KINO • Father Worked In Industry
C.DB.SN • ...at the end of it all
VOMITO NEGRO • Fall Of An Empire
HITHERSIDE • EP
DAVID FONSECA • Seasons: falling
CLAN OF XYMOX • Kindred Spirits
RADICAL G • Sinner EP
UNITED AND IDENTIFIED • At the border of the line
(((S))) • The moon is my sun
ROBERT B. WEIDE • Woody Allen : A Documentary