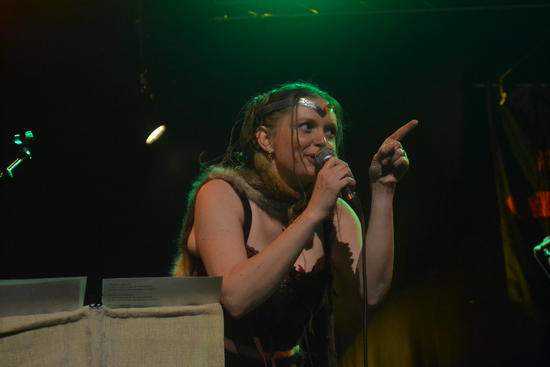 The festival is totally sold out and logically a lot of people are already attending very early. I love the little podium for disabled people in the back, some kids are sitting there too with some grand parents, watching it all from a certain height and at a safe distance from what will be an all night long party with lots of dancing, clapping, jumping and singing from out of more than 3.000 mouths …

La Horde is the first band, with drummer ad-interim Mich of Rastaban. It starts with people carrying torches and handing out chocolate eggs to the audience (it is indeed Eastern). The music is very much in a folk party mood, and they even dare to play famous songs and turn them into folk. Their disco transformation ('Daddy Cool' from Boney M) is already famous, just as their version of the classic 'What Shall We Do With the Drunken Sailor’, but what they do with a song of The Prodigy is absolutely amazing and unexpected. Further more they get the help of a nice girl who plays the lyra and the gigantic Florian of Les compagnons du Gras Jambon. Lili (from Naheulbeuk) dressed in a pumpkin comes along to sing us a song and carry on the party. The pirates of La Horde presents us lots of fun and it is indeed very clear why they come back after each edition. The audience absolutely loves them and sings almost every word along. With the amount of people around me, it rather feels as if none less but the mighty David Bowie or The Cure is bringing a best of, just incredible how good the audience is into their music. The grande finale with their own tune called La Horde, goes on into a medley. No limit from 2 Unlimited, Greed from Desire, We like to Party, I like to move it … Start smiling and imagine their medieval version of these commercial hits. We all had lots of fun and left with a big smile.

When I prepared myself for this German band I got hooked on their latest album and noticed on the internet that they sold out almost every gig in the past weeks: after this set, I know why. They dress up as medieval knights, carry on flutes and a bagpipe and a small castle. They present themselves as a brotherhood of party players. Feuerschwanz is on fire, makes us jump, clap, laugh, sing, party time from the first note until the farewell. They invite a girl on stage and play a little game with her: from being not attracted to totally in love with the big blond guy who kisses her on the mouth in the end as if it was an accident. The second time they invite a guy who has to surf with a board over the crowd. I must say they first took off half of his clothes and told him he could only come back at the end of the song. It was a nice view and the guy went all the way up and down. The audience mainly speaks French, but that doesn’t matter for as long as they can party. The vibe is very positive, you can almost feel the energy. Ship ahoy, until the sad song written for the loss of a mother: they shed a tear and move us in the other direction, before getting to a final climax by making everyone cry from left to right, and jump as if our boots were on fire. Their latest CD was sold afterwards in huge amounts, that says enough. What a party.

Naheulbeuk aka Naheulband is a strange band for people like me who see them for the first time. First of all: everybody knows their stories and sings with lots of passion all along as if they had all co-written the lyrics. I’m talking here about the audience. The fans where warming up their throats before the stage building was even done. Imagine an RPG turned into music: all the players are standing in front of the stage, dressed as elves, dwarves, mages, ogers, … The people on stage are the storytellers and heads of the units in front of them, just conducting them from one short story to another … It is very clear why they came back after every edition and became the perfect headliner of the first day. Next time sing Poulet Poulet … and if someones answers with Piou Piou (aka Tsjoep Tsjoep), whell then you know you have a fan of these 6 folks next to you, as the god of chickens has spoken. To understand this you had to be here. This Poulet Poulet will come back over the next days, Eluveitie was a bit amazed by this little chant, but somebody has to tell them this story …

Well, it is clear that the opening night is always a party with very special bands that sound and look as if created for this great event! 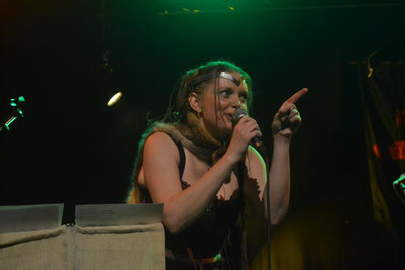 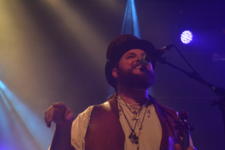 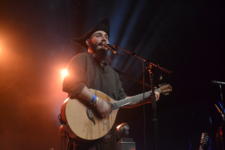 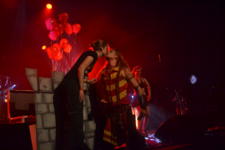 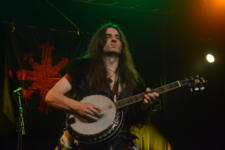 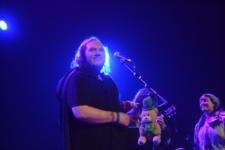