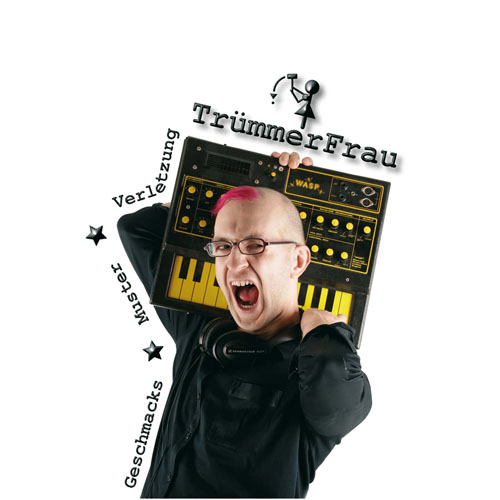 It looks like the German scene has a new star amongst them as Trümmerfrau is a band you hear more and more on the lips of people following the alternative dance-scene. Our collegues from Nachtaktiv-magazine described their music as an ideal blend of David Guetta and And One and this definition pleased mastermind Jan Pawelczyk.

Trümmerfrau have already been around since 2006 with a first album, ‘Musika Motteki’ being released two years later. But it's only since their latest "Geschmacksmusterverletzung" was released, that this duo from the Ruhr-area have been ready for international stardom and with a fanbase in France, Finland and the USA already, this may even work out!

Love parade music for black souls, then? Call it what you want but the eleven tracks that are to be found on here do indeed contain elements of commercial house and techno and have, at the same time, a synthpop/futurepop/EBM-appeal. Just listen to a track like "Mongo, Mongo!" that can please EBM-addicts as much as trance-heads.

Of course this is the type of album that's meant for a party. They all might have some moral underground, still it's clear that Trümmerfrau are directing their attention more to your feet than our head.

Both sung in English and German you get an album which can definitely hit the German-market as over there, they are so smart to give all synthetic sounds a chance rather than the sad pigeonholing we know here.

Definitely one of the feelgood-albums of the moment!