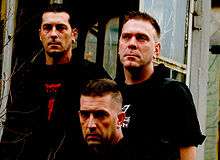 EBM-heads of course know what Tyske Ludder are all about, but for those who don’t (or just have a lack in their memory) we want to reopen the file.

Tyske Ludder is a German EBM band. Their members include Claus Albers, Olaf A. Reimers and Ralf Homann. In the beginning of the 90s Tyske Ludder set the course for their work as pioneers in the European EBM and Dark-Electro scene. Coming up from the Wave- and New-Romantic scene they developed very early their meditations on the predominance of technology in our society. Nightmare-like visions of the then-raging war in Yugoslavia as well as the recurring military enforcement of the United States' claim for world domination represent the other thematic constant in the work of the 'German Whore'. Through the years their musical model developed from heavy Electro-Sounds to some kind of ominous dance music somewhere between Industrial and the aroma of a nuclear blast.

2006: Bombt die Mörder? – Re-Release with many remixes at Black Rain

2006: Dalmarnock – Re-Release with many remixes at Black Rain

2006: Creutzfeld E.P. – Re-Release of the EP with many remixes at Black Rain