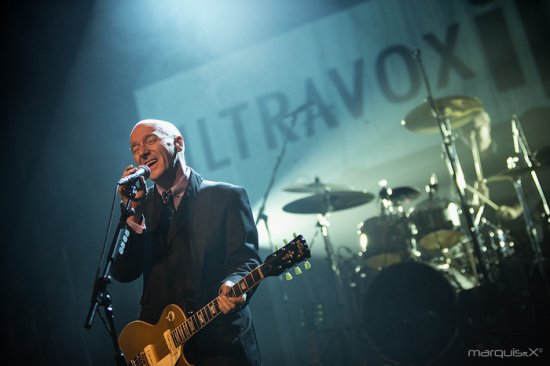 Following John Foxx' widely acclaimed concert in Aarschot in February (see our review and our interview), Ultravox, the band that Foxx co-founded in 1976 and that is led by Midge Ure since 1979, visited Belgium on 11th October. In music history, Ultravox is considered as the first band that combined Punk with Krautrock, Glam and Art rock to create a new kind of music, which would later be called "new-wave" ("synth-pop"). It was back in 1977, before Gary Numan and Depeche Mode. Unfortunately, success didn't come for them and Ultravox had to break up. Then came Midge Ure (Midge is a phonetic reversal of Jim, the diminutive form of his real name, James). Midge got in touch with Billy Currie, Ultravox keyboardist and violonist, when they both were working on the project "Visage". They decided to revive Ultravox and success came thanks to catchy songs like "Vienna" and "Sleepwalk". Ultravox became one of the spearheads of the "New Romantic" movement and released very successful albums. The sound of the band evolved from a minimal, new-wave sound in '80 (inspired by the "John Foxx period") to a more symphonic power-pop in the following years. After their break-up in '88, there was a new avatar in '93 (with Currie as only original member) and Ultravox reformed in 2008, originally only for a "Reunion Tour", which led them to the "Lokerse Feesten" in 2009. Seeing the success and the demand of the public, they decided to record a new album.

"Brilliant", released in May 2012, was therefore the band's first album since "U-Vox" in... 1986! At the Trix, the band presented us this new album but made sure to devote the greater part of its very long concert (2 h 20 with a break in the middle) to its most famous classics. The lineup on stage was the '79-'86 lineup with Midge Ure (vocals, guitars), Billy Currie (synths, violin), Warren Cann (drums) and Chris Cross (bass). The songs from the new album, "Brilliant", "Change" and "Rise" matched perfectly with the typical Ultravox 'classic' style of the period '82-'88. The sound was perfect and the songs acquired a new dimension on stage, with more power, especially thanks to the live drums and the guitar. Ure's voice is nearly as perfect as 30 years ago but he sometimes struggled to achieve the highest notes.

The choice of the older songs was very appropriate: first "New Europeans", that had postpunk tones with its guitar intro and solo. Then the magnificent track "Mr X", featuring a very rare lead vocal by Warren Cann and old black and white video's. Here, you could feel the influence of Kraftwerk and Currie's very experimental violin solo was warmly applauded by the audience. After "Reap The Wild Wind", on which Ure invited the public to clap their hands, "Visions In Blue", very nice, "Change" with its Kraftwerkian synth notes, "White China", "Rage in Eden" and "Rise", the public made noise for "Sleepwalk", the band's first single released in June 1980! A very energetic song, featuring a great synth solo by Billy Currie. Watch this great moment in the video below:

The first set ended with probably one of Ultravox' best songs: "The Voice". In the chorus, the public screamed the "Oh Oh Oh" with Ure; there was again a wonderful synth solo and at the end, a big surprise: a drums explosion with Cann on drums and Cross, Ure and Currie frontstage hitting a snare drum: the whole public was shouting and clapping hands like crazy for this resounding end of the act: impressive! Check this below (at 5:00):

After a 15 minutes break, the band returned for "Live", the second single from their new album, a very efficient pop song, which showed clearly how bands like Coldplay were influenced by Ultravox. After this, it was "The Thin Wall", another great classic, followed by the romantic "Lament" and the melodic "I Remember (Death in the Afternoon)". The "Astradyne" instrumental gave a nice ambient atmosphere, especially with the video and the sweeping, majestic synthesizer arrangements.

When they played "Vienna", Ultravox' biggest hit, in a way their 'Bohemian Rhapsody', it was another highlight. We all felt shivers down our spine. The music was perfect and Ure's voice amazing. In the famous accelerated part, Currie managed to go from his violin to his piano and the ending was simply magical.

The most part of the second set was a steady progression with "One Small Day", "Passing Strangers" and "Love's Great Adventure" towards the two last songs, "All Stood Still" with its jumping rhythm and "Hymn" with its skyscraping anthemry, pulsing synth lines and gorgeous textures. Every single person in the room was singing along with the band the -nearly biblical- lyrics: "The power and the glory - Till my kingdom comes".

The band came back for the encore songs: the beautiful and slow "Contact", from "Brilliant" and eventually, the band's dancefloor killer "Dancing With Tears In My Eyes".

A great concert! Ultravox proved that, at an average age of 60, they are still perfectly mastering their art. Powerful songs, great musicianship, pure energy on stage: a perfect recipe that is becoming scarce in these techno times. After pioneering modern electronic music 30 years ago, they are still here and hopefully they are back for good!