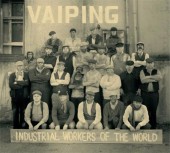 Industrial workers of the world

This is their second (concept) album, a bit more accessible if i may believe the bio. Sounds very Nine Inch Nails (the late version, like on the soundtrack of the movie called 'The girl with the dragon tattoo'), but then with catchy choruses or even an heavenly voice from time to time and a less aggressive sound. The last song 'Pie in the sky' has even a more poppy sound. I recommend this record for the ‘die hard ‘fans of industrial and for sure for those who want to hear something different. It's experimental sound wil capture them for sure!