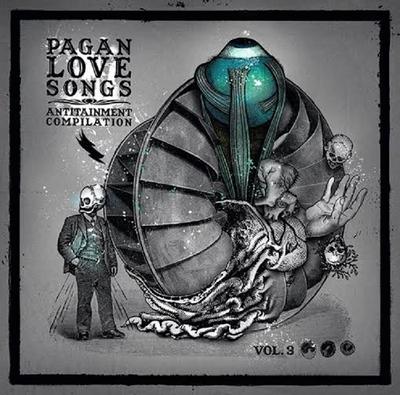 Pagan Love Songs is a double album, counting 40 tracks compiled by the DJ brothers Ralf and Thomas Thyssen. Just as in many other compilations, they selected some rare and previously unreleased tracks, as well as some exclusive tracks or songs in an exclusive version as a sales argument. But the interesting thing about Pagan Love Songs 3 is in my opinion that they compiled some classic names of the 80’s, with some older and younger upcoming bands that are inspired by the 80’s. The first disc is more electronic, while the second disc is mainly guitar orientated.

The bigger 80’s bands on this compilation are The Chameleons, The Fair Sex, No More and Psyche. You can hear some great gothic rock of the 90’s such as Rosetta Stone, Judith and Catastrophe Ballet. You can find more recent bands that made their name, such as Frank The Baptist, The Devil And The Universe and the fantastic She Past Away (from Turkey) with Rituël. Another great track is Malarone of the parted Linea Aspera, with the great Alison Lewis (Keluar nowadays). You can discover nice newcomers such as Ash Code (from Italy) and the synthpop project Azar Swan. You also can discover rather unknown bands such as Nejet Nok; their minimal synthpop is worth checking out.

Pagan Love Songs Vol.3 is a versatile and interesting compilation with lots of variation: batcave, gothic rock, post punk, synthpop, minimal wave, etc. Only 1000 copies of this album were released and as this release is already a few months old, you better don’t hesitate too long if you want to purchase the album.