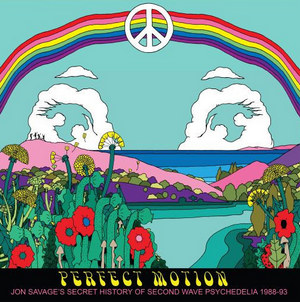 Rather too infrequently, probably due to budgets, the likes of the excellent CTR label knock out the kind of compilation you wish had been released 'back in the day'. Perfect Motion is one such collection that brings together over a dozen terrific anthems drawn from the vaults of the so-called late '80s and early '90s 'second summer of love' era and beyond. Just don't mention 'baggy' - this is a bonafide no-nonsense psychedelic-induced dance-pop compilation that doesn't smack of 'cash-in', 'greatest hits' or 'baggy anthems'.

With Jon Savage curating, you know you'll get quality - initially inspired by a trip to New York in the mid-'80s, Savage's relationship with Acid House and the like remained throughout the genre's short-lived grip on the underground and mainstream.

Some cracking extended mixes are present in the form of Shack's woozy I Know You Well and the DNA Groove Mix of Electronic's sublime Get The Message, plus some select singles (Box Set Go by The High included) and album tracks from Primal Scream and Sabres of Paradise.

But it's the b-sides and oddities that stand the test of scrutiny. Pet Shop Boys' cerebral The Sound of the Atom Splitting never ceases to fuddle the brain-box and feet, while St Etienne's hefty Filthy is just that.

Extensive sleeve-notes and a limited extra mix CD add to the experience without having to shovel pills down your neck in a waterlogged field or sweat-drenched club.